A potentially dangerously active pattern during the month of April looks to get going with this upcoming system this week. While this currently doesn't look to be a higher end threat in itself (That comes with the next system..), this could potentially prime Dixie for the upcoming threats down the road, while also being a lower end severe threat (Which could quickly trend more substantial if the trend is for the trough to phase..)

I'll post the morning AFD from one of our own members here at TW as I'm currently in a timecrunch and unable to look at models:

The potential for strong to severe storms may be increasing for
Tuesday night into Wednesday morning as low amplitude shortwaves
in the northern and southern streams eject eastward across the
Plains. Currently it appears that these shortwaves will only
partially phase, but there is quite a bit of model variability
between the much more phased UKMET and the GFS. The ECMWF is
perhaps the middle ground. Significant CAPE is expected to surge
northward from the western Gulf into the Lower Mississippi Valley
ahead of the approaching front. The positive tilt nature of the
front suggests convection will not be pre-frontal and will be
generated by the front itself. The strongest instability to remain
to our west, but CAPE values around 1000 J/kg, as suggested by the
ECMWF, would support a potential for isolated damaging winds along
a line of storms. If this system becomes more phased as shown by
the UKMET, the severe weather threat would increase substantially.
A low confidence risk of severe storms will be placed in the HWO.

Having a tornado threat sometime in the first week of April in Alabama is almost up there with death and taxes. That being said....it is incredibly creepy to me to see a severe threat for the infamous dates of April 3-4, especially when the year 1974 keeps being mentioned. (I know that's for a later threat, but it still makes my hair stand on end.)

Lol, I remember people on multiple weather forums got absolutely reamed for bringing up Super Outbreak analogs in the days leading up to 4/27/11, even when the sky-high STP values were staring everybody in the face.

It's a lot farther out at this point so I'd hold off on that, but it'll certainly be interesting to track.

Models are going toward a more clean/complete phase of the southern stream vort and the northern stream trough for Tuesday/Wednesday system. Euro/UKMET are indicating a pretty healthy severe threat for a large area from Louisiana/Arkansas east into Mississippi/Alabama/Tennessee.
A

I’m in the Big Bend region of Florida this weekend. I’m driving back to Huntsville Tuesday. I understand the severe stuff wouldn’t get to north Alabama until after dark? What can I expect on my drive home up 231/65 Tuesday?

akt1985 said:
I’m in the Big Bend region of Florida this weekend. I’m driving back to Huntsville Tuesday. I understand the severe stuff wouldn’t get to north Alabama until after dark? What can I expect on my drive home up 231/65 Tuesday?
Click to expand...

Way too early to get into timing specifics.

EURO at around 4a pretty healthy line of storms with potential for embedded TOR's if parameters correct.

Looks like north & central Louisiana will be a hot spot for elevated activity, with east Texas, Arkansas and perhaps north west Mississippi utilizing the best instability/shear in the environment. By Tuesday evening the models indicate (at this time) a QLCS looks likely to roll through the rest of Dixie stretching from south LA/MS up to the Ohio valley.
As for Alabama and Tennessee, it's hard to know what affect night time will bring to the intensity of the storms. The parent low will also be far to the north passing over/near the great lakes. If convection remains strong, I imagine a marginal tornado risk may exist. Overall I would be surprised to see anything more than wind damage and a single spin-ups or two. There's still a fair amount of uncertainty though.

Pretty nasty squall line shown on the models for Tuesday night. QLCS with damaging wind, but enough backed surface winds and low-level jet along and north of I-20 will permit a tornado threat with the QLCS as well.

The lapse rates look very healthy with this system.
TalkWeather Members Do Not See This Ad - JOIN TODAY

As usual 3k always a bit jumpy with severe... Will add probably need to tone this back when it gets inside 36-48hr

Xtreme Weather said:
As usual 3k always a bit jumpy with severe... Will add probably need to tone this back when it gets inside 36-48hr

EURO 850's will say are veered nicely coming out of the SW (time stamp ous 1a had to downsize to get to load)
View attachment 577
Click to expand...

Unlike a couple of years ago, and probably last year too, the 3 km NAM has actually performed decently well with the systems we have had so far this year... and if anything, wasn't bullish enough on parameters with both the late February event in the Mid South or the Jacksonville event a couple of weeks ago. ALL of the models have been underdoing thermos when compared to actual observations for the past several months... and the NAM / SREF have consistently had the best handle on wind profiles and instability / shear parameters with our systems so far. In fact, the 3 km NAM was also one of the main ones downplaying the "threat" this past Thursday, while the others were a little more amped up. It's an interesting reversal, but it has been consistently the case.
Fred Gossage
Chief Weather Dude
Tennessee Valley Weather

Things look quite cellular along the boundary initially before shear vectors orient more parallel to the boundary as the evening progresses. 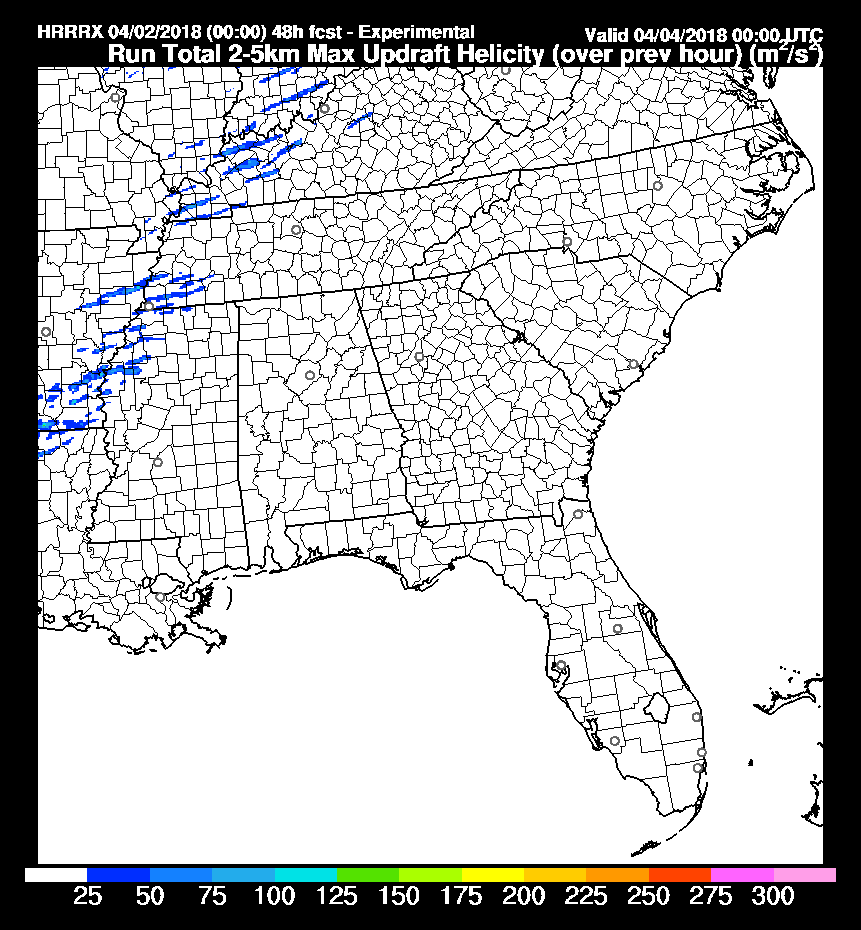 4/4/2011 is popping up as the top CIPS analog according to somebody I know. That's ome of the nastiest QLCS systems we've had here..
T

...at least until the morning round on 4/27. That one blew all the rules of thumb about predawn QLCS's out the window.

CheeselandSkies said:
...at least until the morning round on 4/27. That one blew all the rules of thumb about predawn QLCS's out the window.
Click to expand...

That MCS did things MCS systems just flat out shouldn't do, like produce a 60 mile long EF-3 and not work over the airmass or disrupt the wind fields AT ALL. That was crazy.

April 4-5, 2011, serial derecho is still king when it comes to spatial coverage and number of damage reports.

The 06z NAM is as potent of a run as we've seen with regards to this QLCS as it has been. We're talking lapse rates 7.5-8 C/KM ahead of this line.
TalkWeather Members Do Not See This Ad - JOIN TODAY

Up until this forecast the threat potential has been way under forecast by the SPC. The model forecast have always looked to support a slight risk over a much larger area into the Ohio Valley, and an enhanced risk area. I’m happy to see a better forecast for this event now.
T

Wow. Latest run of 3k nam has a very potent line through west tn afternoon tomorrow ... seems super cells try to fire out ahead ... couldn’t paste. Sorry
TalkWeather Members Do Not See This Ad - JOIN TODAY
You must log in or register to reply here.