warneagle said:
91L is starting to get its act together as well.
Click to expand...

Honestly it could be declared based on ASCAT.

Gonzalo is now forecast to be a hurricane by tomorrow morning. Not surprising given those absurd SSTs.

Potential Tropical Cyclone advisory coming for 91L in the Gulf. Likely to reach TS strength before landfall in Texas.

We have Hanna, which is the earliest 8th named storm on record, beating Harvey (not that Harvey), which formed on 3 August 2005.

The first big long tracker looks poised to develop with the wave currently emerging off Africa. Favorable CCKW that enhanced Douglas into a major cane in the Pacific is now pushing into the Atlantic basin enhancing Gonzalo, Hanna, and what will likely become future Isaias...

This looks like it has the potential to become a threat to the U.S. American global guidance doesn't develop it...European guidance does. 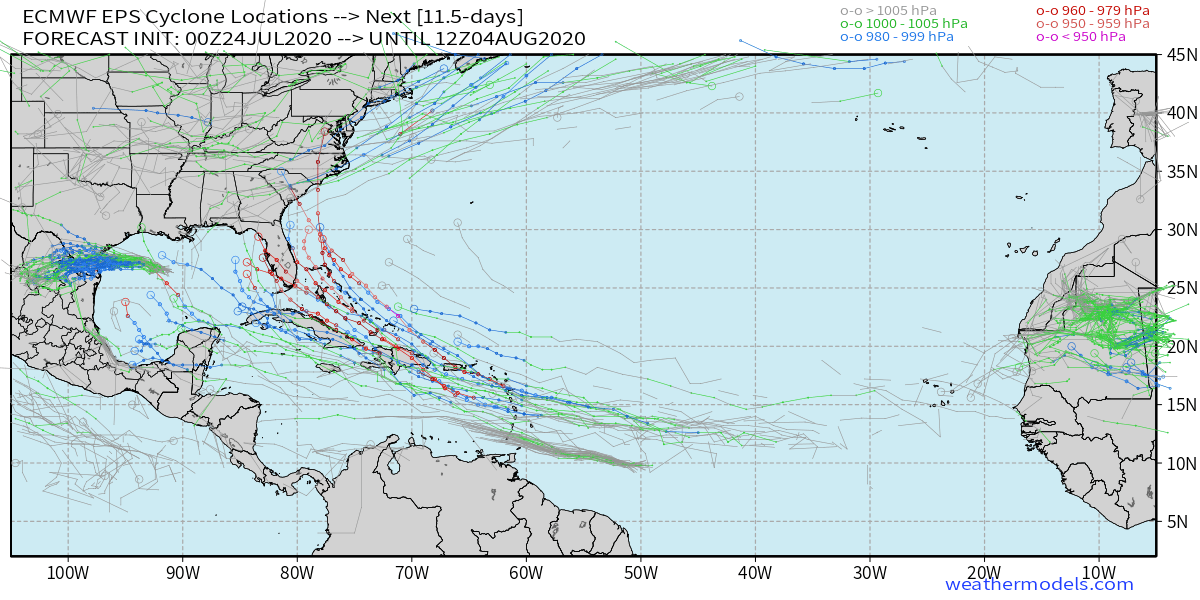 Looks like Hanna will be able to reach minimal hurricane status briefly before it makes landfall.

warneagle said:
Looks like Hanna will be able to reach minimal hurricane status briefly before it makes landfall.
Click to expand...

Yeah she's moving slowly enough that she could probably manage it.
M

warneagle said:
Yeah she's moving slowly enough that she could probably manage it.
Click to expand...

A thing to keep in mind also is that friction from the outer bands coming onto land may also cause the center to tighten. I thought Joe Bastardi brought up a good point.

Say hello to Josephine way out by the Cape Verdes. This should have been named already, but the NHC is being bearish for whatever reason.

MJO heading into phase 4-7 over the next couple weeks. Models not particularly bullish on development for that time period, no real surprise.
"Scratch my back with a lightning bolt
Thunder rolls like a bassdrum note
The sounds of the weather is heaven's ragtime band...."~Jimmy Buffett

Tyler Penland said:
MJO heading into phase 4-7 over the next couple weeks. Models not particularly bullish on development for that time period, no real surprise.
Click to expand...

Background state overwhelmingly favors the Atlantic...I'm not sure intraseasonal variability will matter much now that we're headed into the climatologically most favorable period on top of that.

Kory said:
Background state overwhelmingly favors the Atlantic...I'm not sure intraseasonal variability will matter much now that we're headed into the climatologically most favorable period on top of that.

Yeah it's gonna be active regardless just thought the potential mjo swing deserved a mention. The euro could certainly be correct with the COD forecast. I'm far from versed in large scale tropical stuff just know there's a known coorelation between the mjo and tc development.

Long range ensembles showing below average mslp for most of the MDR in the 10-14 day range.

Sent from my SM-G960U using Tapatalk
"Scratch my back with a lightning bolt
Thunder rolls like a bassdrum note
The sounds of the weather is heaven's ragtime band...."~Jimmy Buffett

So CSU released their updated outlook for the rest of the season. It would go down as the second most active season ever if it comes to fruition. And given how we’ve had 9 storms and 2 hurricanes already (both landfalled in the US), I continue to get bad vibes from what we are going to see over the next 6-8 weeks.

Why do it feel this way? Check out the forecasted 500mb pattern for week 2with analogs:

Notice the dates? The infamous 2005 is top but is also down the list as well. 2002 is another year that was primarily focused on the Gulf Coast. 1995...the list goes on.

Now, let’s check the intraseasonal state. We know the background state favors the Atlantic. Standing wave over over Africa/Indian Ocean leads to large scale sinking over most of the Pacific. It also churns out the African Easterly Waves that become long trackers.

The blue/green large centered over 60E is the standing wave that will be churning out tropical waves. The red/orange over the Pacific centered on 180-120W is the sinking branch leading to stability over the Pacific (there will be some spurts of activity). And the green splotches over the Atlantic centered on 60W are the intermittent CCKW’s (convectively coupled Kelvin waves) that will aid in enhancing development over the Atlantic. Notice how it persists through most of the core of hurricane season? Yeah, combine that with the pattern we’ve had and what’s forecasted...this has the potential to be very, very ugly. But, we won’t know that til it is all over.
A

Wouldn’t it be ironic if sweet Nana became a powerful Cape Verde Hurricane instead?

Just wasting names on fish storms at this point. What happens if we get through the Greek alphabet? Cyrillic?

And this is all while the Atlantic is under a suppressed phase.

Speaking of the MJO, man the GFS is such a garbage model. There are some basic fundamentals of meteorology the model just doesn't grasp. Pretty much makes it useless in the mid to long range.