Models amplify a trough Thursday through the weekend across the eastern US. The jet configuration is healthy being that it's broadly stretched, and abnormally strong for this time of the year. It will filter in cooler air aloft resulting in steep lapse rates, and a strongly unstable atmosphere. Shear profiles will be plenty supportive of severe storms.
Last edited: Jul 18, 2018

Can we please pin this to the top. It appears very few people are seeing it, and don’t know about the significance of the threat.

Here is your daily holy cow moment curtesy of the NAM. Interesting enough however, the 12km NAM never develops convection.

There's a lot of really unnecessary hype with this system, particularly with everyone circulating the very anomalous 06z NAM STP values that will not be verifying in any way, shape or form. This will be a damaging wind event - not a tornado event.

rolltide_130 said:
There's a lot of really unnecessary hype with this system, particularly with everyone circulating the very anomalous 06z NAM STP values that will not be verifying in any way, shape or form. This will be a damaging wind event - not a tornado event.
Click to expand...

Agreed. People forget that anomalously high number is really a result of the ridiculous cape.

The amount of cape added in to the strong EML and high laspe rates with the good shear means a very intense MCS if a strong cold pool gets going.

The LR/CAPE is there, if convection gets going then we could be looking at some pretty potent supercells with strong winds & lighting. Given the trend this season I wouldn't be shocked to see more convection than what's currently depicted by the NAM. If this was the past few years, I'd be surprised to see anything come of this. Certainly we should be paying close attention to this system d/t seasonal trends and wind damage threat even though it's not a classic tornado setup. Never know what's going to happen in July. SPC seems to be erring on the side of low-impact, wait and see - conservative.

But...But...But...it's so tempting in a foreboding and exciting way for the month of July!

I have a wedding to go to Saturday night in Huntsville. Fortunately, it is indoors at a church.

The 0z NAM is insane for anytime of year. Cape is pushing 6000 on some of the soundings and while I don't think tornadoes will be the main show, it flagging the PDS threat shows how incredibly unstable it is. That high DCAPE number is concerning as well as is the 55-65kts at 500mb. Thus is near Tuscaloosa late Saturday. The big question though is do we get enough of a trigger to cause storm initiation. 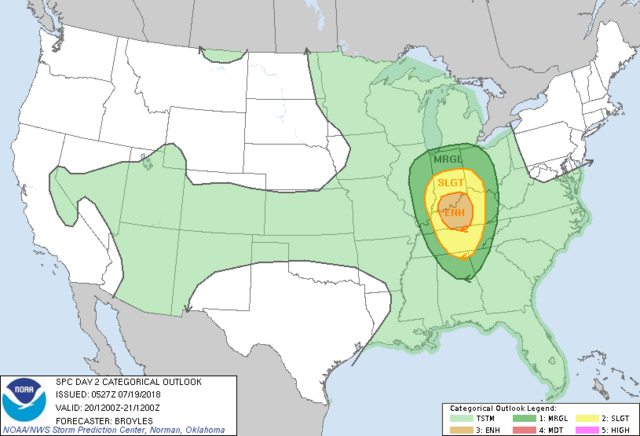 Please pin this thread to the top. This is a significant threat potential. This has been evident for several days now, and we are not far from it happening. Thank you.
Last edited: Jul 19, 2018
D

Both WRFs show the nasty MCS early Saturday. The NMMB is later in the day which would allowing for greater instability.

Taylor Campbell said:
Please pin this thread to the top. This is a significant threat potential. This has been evident for several days now, and we are not far from it happening. Thank you.
Click to expand...

Done and done.
Got Wobble?

Just a note, if you are voting, and vote no then that means you think this threat will not verify as a enhanced risk, and only as a slight or less risk.

The high res NAM since it’s got into range has shown an intense thunderstorm complex on base reflectivity.

While I do think that straight-line winds will be the bigger threat tomorrow night, I have seen stranger things than non-tropical tornadoes in July. May not be a classic outbreak situation, but all it takes is one small tornado to wreck someone's property or life. Ask the lady in my county who lost her home and everything she owned last month in a surprise tornado in Jones Chapel. I prefer to err on the side of caution.

Destructive tornadoes in Iowa today, just like we were all expecting.

..TORNADO EMERGENCY FOR MARSHALLTOWN...
The National Weather Service in Des Moines has issued a

* At 437 PM CDT, a confirmed large and destructive tornado was
observed over Marshalltown, moving east at 25 mph.
TORNADO EMERGENCY for Marshalltown. This is a PARTICULARLY
DANGEROUS SITUATION. TAKE COVER NOW!
HAZARD...Deadly tornado.
SOURCE...Law enforcement confirmed tornado.
IMPACT...You are in a life-threatening situation. Flying debris
may be deadly to those caught without shelter. Mobile
homes will be destroyed. Considerable damage to homes,
businesses, and vehicles is likely and complete
destruction is possible.