Operational GFS has shown what could potentially be Bret for several runs now. It's been moving up in time, and there's a fair amount of ensemble support. Definitely an area, and way of development that is climatology favored.
Last edited: Jun 6, 2017

As of recent, all of the GFS ensemble members show development. The EURO is also picking up on a disturbance. It looks to possibly develop by next weekend.

Latest GFS has a storm that impacts from NOLA to landfall east of Tallahassee near Big Bend. Got interesting real quick. 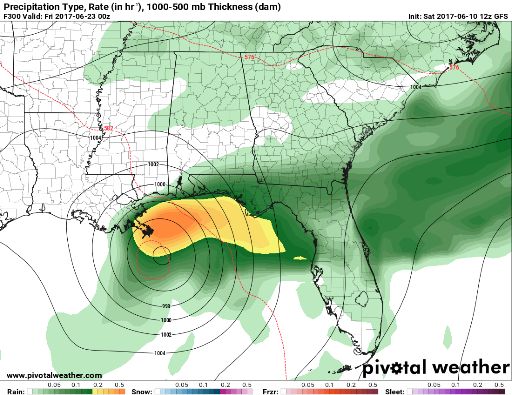 NWS says its a moderate chance

Last Updated: 06.09.17 Valid: 06.10.17 - 06.20.17
The global tropics have been relatively quiet this past week, since the dissolution of minimal Tropical Storm Beatriz on June 2, not far west of the Gulf of Tehuantepec in southern Mexico. For the Week-1 period, there are two low-risk areas (hence no shapes drawn on map) being monitored for possible tropical development. The first is over the extreme eastern Pacific, just south of Mexico's Gulf of Tehuantepec, where a broad area of low pressure is being monitored by NHC. The second low-risk area includes the Philippines and adjacent portions of the South China Sea and Philippine Sea. The Joint Typhoon Warning Center (JTWC) notes that since there is only a weak low-level circulation center, scattered convection, and marginal upper-level conditions predicted for the next 24 hours, tropical cyclone potential is considered low. A statistical mode decomposition tool shows this area may be associated with an equatorial Rossby Wave in the near-term. During Week-2, deterministic ECMWF, GFS, and Canadian model guidance all point to potential formation of a tropical cyclone near the Yucatan Peninsula; either over the far northwestern Caribbean Sea, or the Bay of Campeche. This is attributed, at least in part, to a kelvin wave which is expected to pass through this region several days earlier. In addition, a fairly broad area of above-average rainfall is favored throughout this region.

The MJO forecast remains uncertain given forecast interference between the MJO signal, and other intraseasonal variability. The GEFS-based RMM MJO index currently indicates a very low amplitude signal, which is predicted to gradually amplify over the Africa/western Indian Ocean area during the next two weeks. Areas favoring above- and below-average rainfall were updated based on the latest dynamical model consensus.
Click to expand... 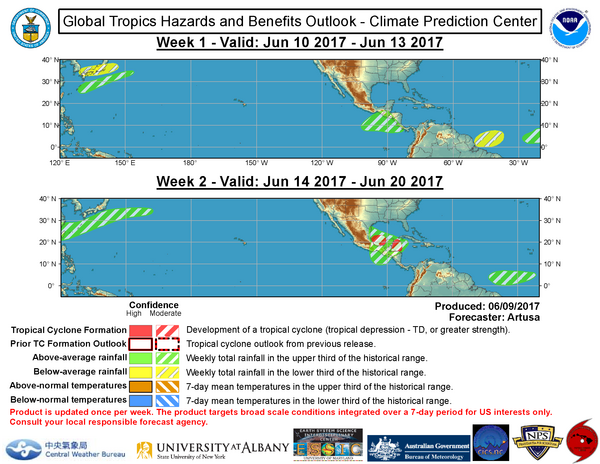 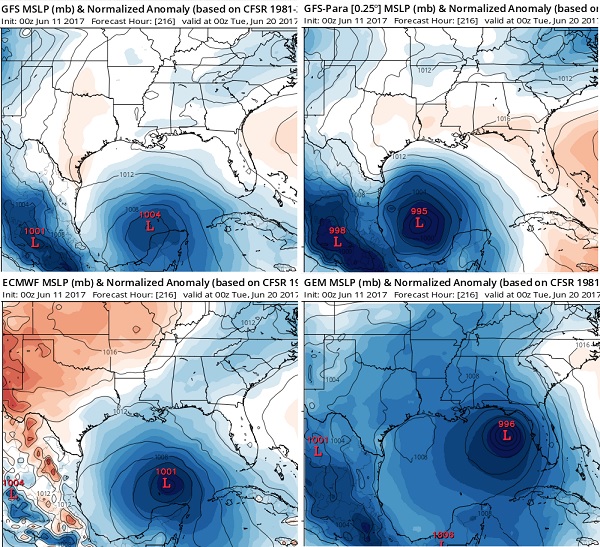 http://www.tropicaltidbits.com/
TalkWeather Members Do Not See This Ad - JOIN TODAY
B

The Gulf is looking interesting next week, models have become consistent with something forming but there's a split between TX/MX and FL.
B

I thought Names were not supposed to be reused when they are hurricanes and cause large amounts of Damage.

https://en.wikipedia.org/wiki/Hurricane_Bret
TalkWeather Members Do Not See This Ad - JOIN TODAY
B

JayF said:
I thought Names were not supposed to be reused when they are hurricanes and cause large amounts of Damage.

A government still has to request it be retired and it has to be pretty bad. Bret made landfall where no one lives down in South Texas(trust me I've been there) so it didn't get retired.

Emily is back this year and it was way worse than Bret.
B

microwave imagery looks suspicious, like it could be near classification.

This might be Bret and the Gulf mess be Cindy lol

I'm not sure why you changed the title on this one. Should have just created a new thread for the Invest that has no model support from the globals.
TalkWeather Members Do Not See This Ad - JOIN TODAY

Can you please fix. Thank you.
B

Anyway they're both code red on the day 5 at 2am and honestly 92L is closer to classification IMO so I wouldn't be surprised if this is Cindy.
Last edited: Jun 17, 2017

Perry would be beside himself about this storm!!!

Looks like decent development is probable, I wasn't expecting a tropical event so soon!

00z model suite has the path narrowed down!!

CMC shifted west to LA, HWRF Into LA, GFS and GFS Para still into Florida, UKMET/last run of the Euro into Texas/Mexico

and landfall is in 3 days on most runs!!! NHC is starting advisories on land-threatening invests this year at some point so it'll be interesting if it happens here because watches could be needed by tomorrow night even if it's not officially a cyclone and the hurricane hunters are scheduled tomorrow as well.
TalkWeather Members Do Not See This Ad - JOIN TODAY

Let's see. I'm supposed to be in Pensacola this week so I'm sure it will be coming ashore near there
Got Wobble?

WesL said:
Let's see. I'm supposed to be in Pensacola this week so I'm sure it will be coming ashore near there
Click to expand...

06z average/TVCN would say you aren't too far off LOL 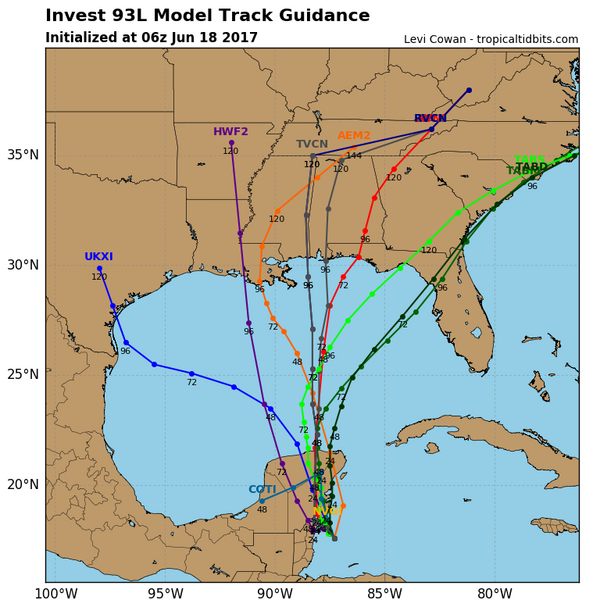