Tornadoes on other Planets/Moons (1 Viewer)

One topic that I find very interesting is extraterrestrial weather as it is so bizarre and unlike anything on Earth. I wonder if there are tornadoes or tornado-like vortices on other planets/moons. There are dust devils on Mars but those aren't true tornadoes. The only places in the Solar System that might experience true tornadoes are Titan, Saturn, or Jupiter.

Titan is known to have intense methane thunderstorms that have been modeled to reach heights of 15.5 miles. The Huygens probe recorded major changes in wind directions with westerly winds at the surface and easterly winds at 3 km. Even though the bulk wind shear recorded by Huygens was very weak, it could be stronger elsewhere. Tornadoes on Titan might be similar to landspouts on Earth.

Thunderstorms are common on Jupiter. These storms are deep and very intense producing powerful lightning and hailstones of ammonia/water. Considering the extreme vorticity and wind shear on Jupiter, it wouldn't be surprising if supercells are able to develop on Jupiter and produce tornado-like vortices. One place where supercells might develop is in the wake of the Great Red Spot where there is both high levels of vorticity and deep-moist convection is known to develop.

Saturn would be a similar situation to that of Jupiter. Splitting thunderstorms have been observed on Saturn which might be a sign of supercellular convection.

So, this is the planet with the fastest confirmed winds in the universe; apparently they whip by in excess of 5000+ (!) mph.

Also, it rains molten glass sideways on this place.

Gas giant alien planets called Hot Jupiters are becoming a popular topic of research, despite their inhospitality for life.

This article is a great introduction to tornado-like phenomena throughout the solar system:

en.wikipedia.org
TalkWeather Members Do Not See This Ad - JOIN TODAY

I sent an email to the Juno time and asked them about supercells/mesocyclones on Jupiter and they said this:
"The size of the mesocyclone involved in terrestrial supercell thunderstorms is typically 2-10 km or so but Jupiter is about ten times the radius of Earth. If we want to broadly compare what we define as “meso” on Earth to that of Jupiter, we should scale up by a factor of ten. Then we are talking of a rotating core of a thunderstorm around 20-100 km. Little et al. (1999) estimated the size of thunderstorms from Galileo images of lightning flashes on Jupiter to range from about 300-1,500 km. It is quite possible that these may be mesoscale convective complexes (MCC; Maddox 1980) containing multiple thunderstorms and these individual thunderstorms could be much smaller, as is the case on Earth. It is possible some of these are rotating and thus could meet the definition of a supercell. But generating a supercell’s mesocyclone, at least on Earth, requires a specific set of wind shears and a decent amount of helicity. We do not know if the required wind shears or helicities are present on Jupiter or what the required wind shears and helicities would be necessary to generate a Jovian supercell. The lack of a solid surface on Jupiter may very well complicate how the wind shear and helicity can be brought to bear to generate a mesocyclone in the first place. Even if present, detecting the rotation of a thunderstorm or even the rotation of an MCC on Jupiter is extremely difficult. For one, most of the thunderstorm and probably any rotating core is located beneath the ammonia cloud deck. Even if we can peer directly on to a rotating core of a supercell thunderstorm, capturing the presence of the rotation of such a small-scale structure is difficult due to Juno’s rapid speed over the planet at the distances required to resolve the storm."

Vorticity, or something like it, also operates on the Universe apparently. 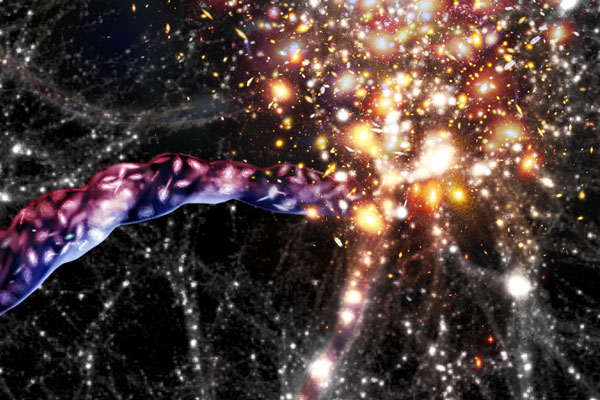 Astronomers find that the largest structures in the universe spin, making twister-like strings of galaxies and dark matter in the cosmic web.

MNTornadoGuy said:
Titan is known to have intense methane thunderstorms that have been modeled to reach heights of 15.5 miles. The Huygens probe recorded major changes in wind directions with westerly winds at the surface and easterly winds at 3 km. Even though the bulk wind shear recorded by Huygens was very weak, it could be stronger elsewhere. Tornadoes on Titan might be similar to landspouts on Earth.
Click to expand...

Is this "cell" warned?

Want to hear a Martian dust devil? Actually it's the effects of particles on a microphone that happened to be on when the thing passed overhead -- not exactly the growl of an F4, but still
---
Please visit my earth science blog!
TalkWeather Members Do Not See This Ad - JOIN TODAY
You must log in or register to reply here.