My apologies if there is already such a thread on this website; I looked and could not find one.

I'll get things started by posting some videos from two events which need no introduction.

(If you don't want to see people being swept up and killed by tsunamis you probably won't want to watch these...) 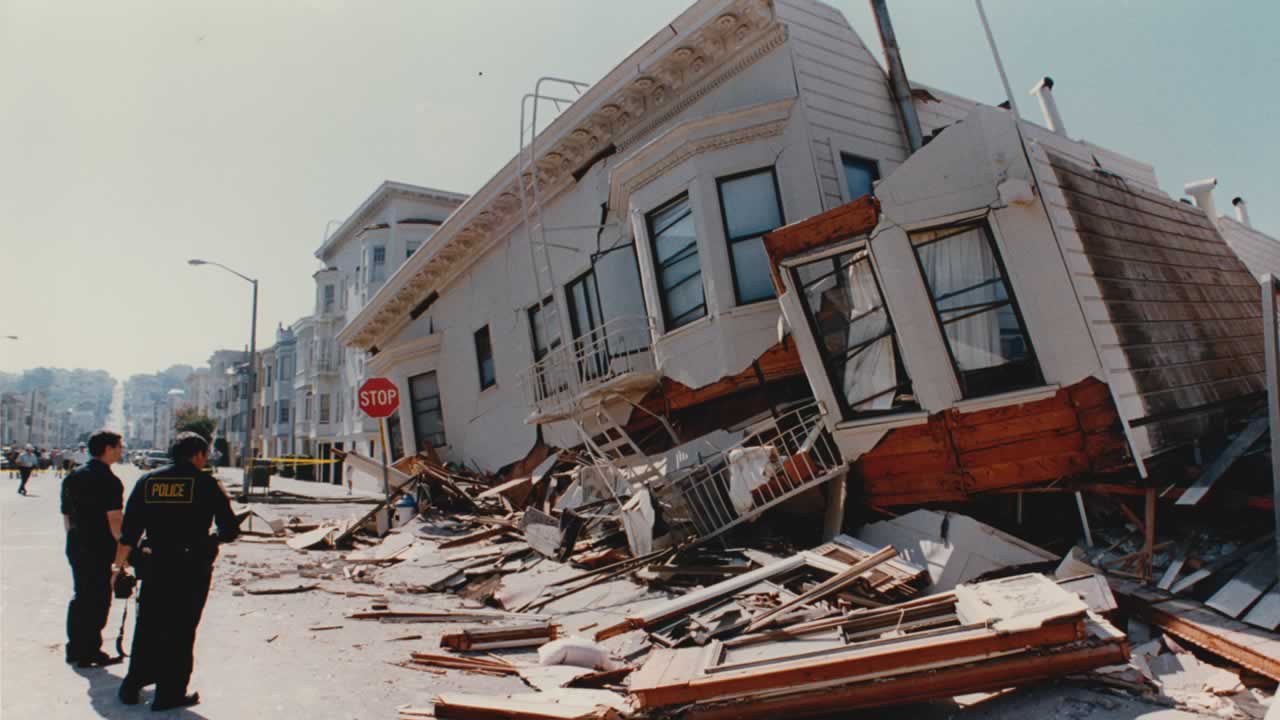 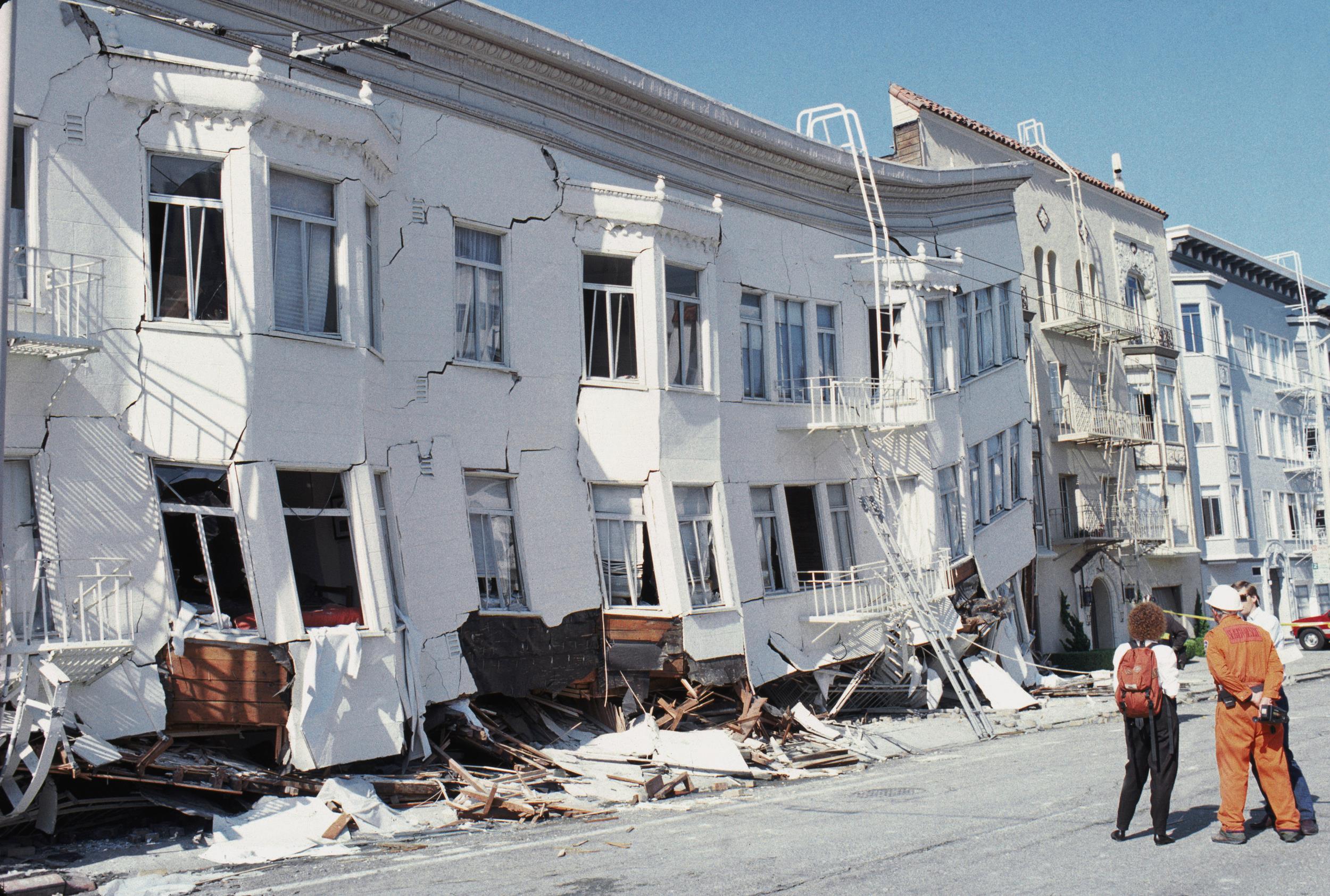 Multi-story wood framed homes and apartment buildings collapsed on to their first stories, or their garage supports in some cases. 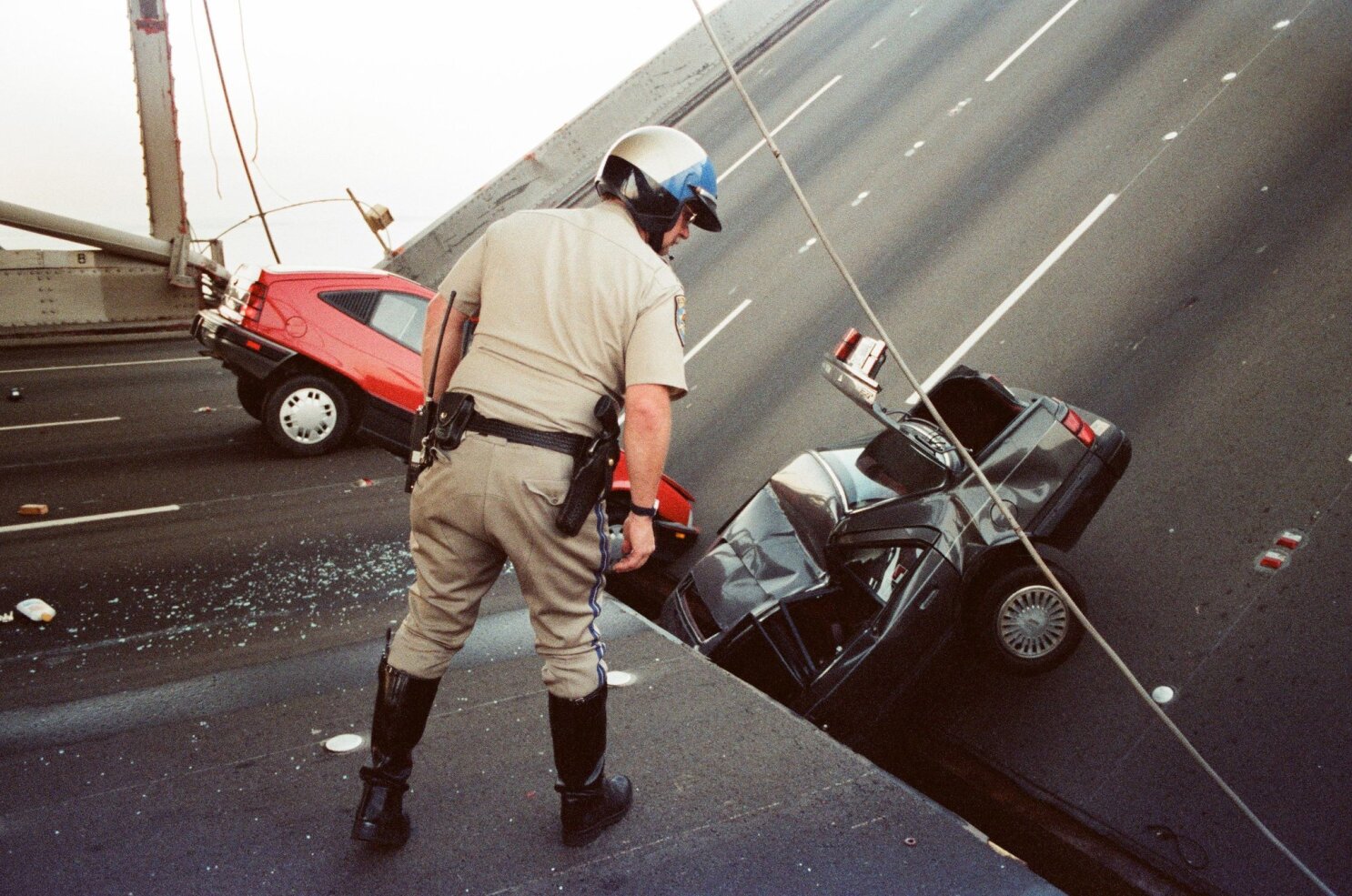 One person died in the car visible to the right of the CHP officer. The earthquake caused a 50 foot section of the Bay Bridge to collapse and the driver likely did not see the collapsed section of the bridge until it was too late. 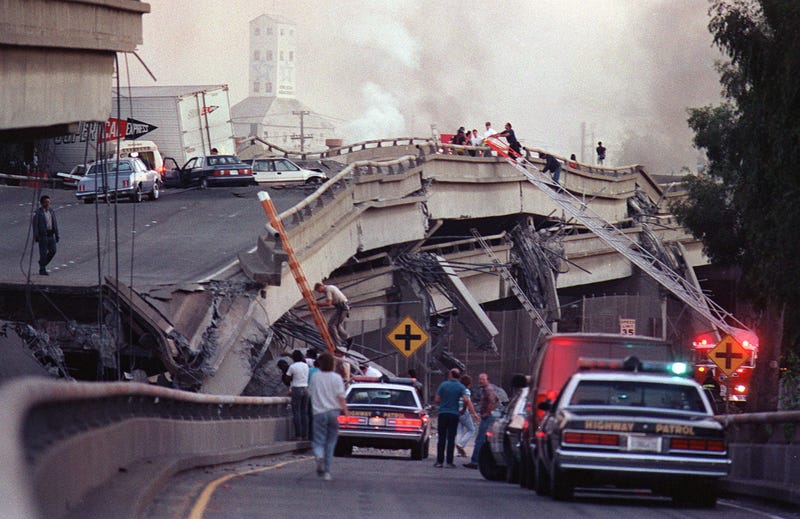 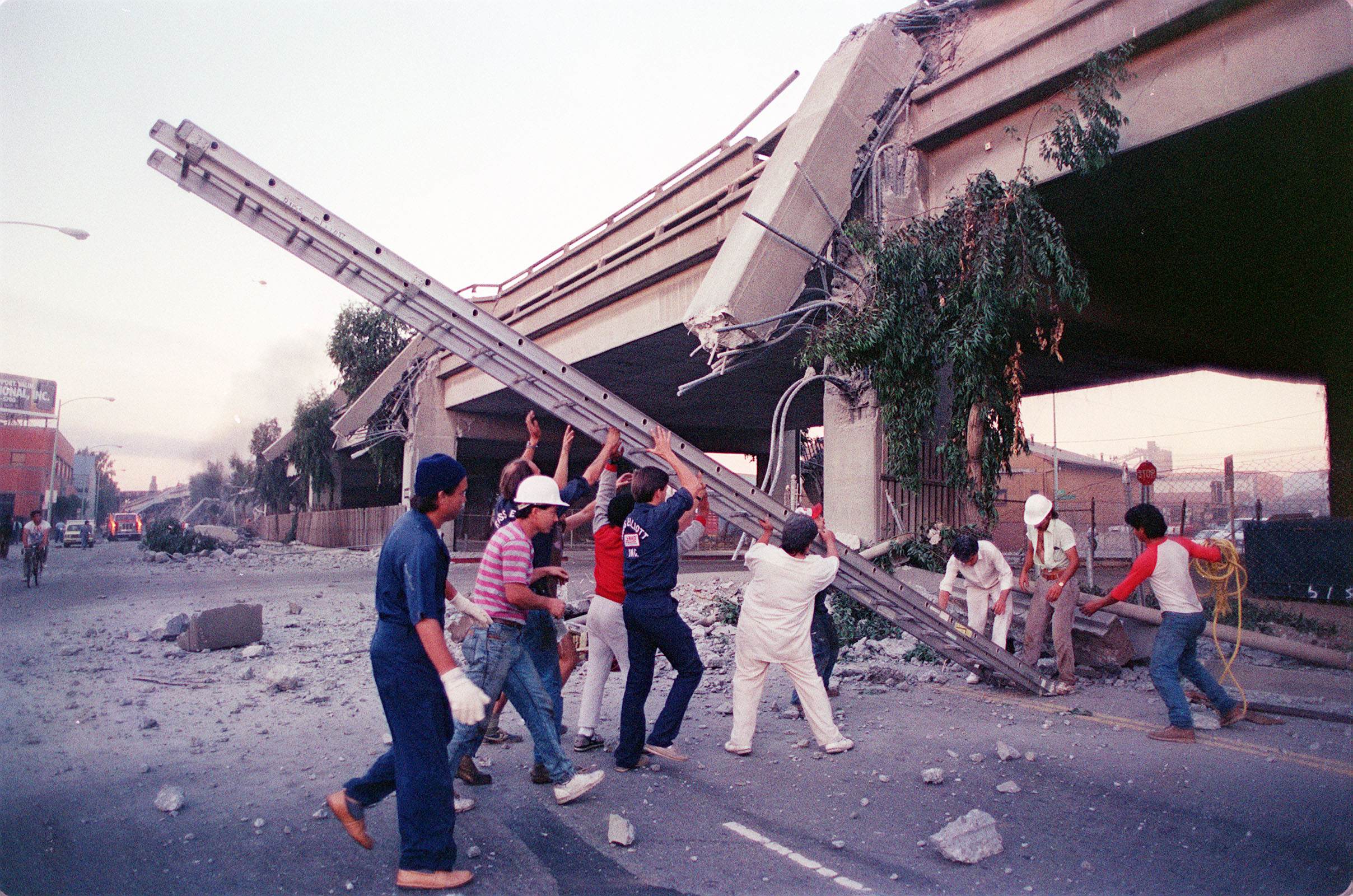 By far the biggest disaster during the earthquake occurred when most of the Cypress Street Viaduct collapsed. The concrete columns were reinforced with rebar, but not ductile, causing them to buckle under the stress of the shaking. Some soil liquefaction occurred as well which likely contributed to the collapse in some sections. Cars on the upper deck were tossed around, with some ending up sideways, and 42 people were killed on the lower deck. 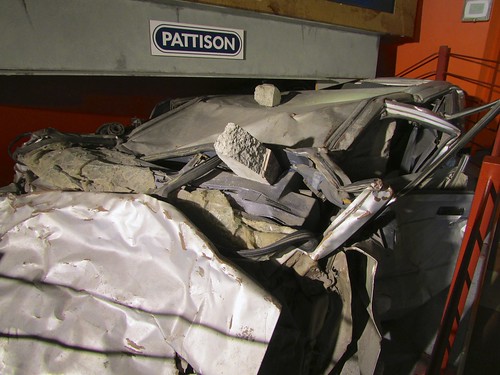 The crushed remains of Buck Helm's car where he survived for four days before finally being rescued. Sadly, he died 29 days after the earthquake.

Today is the 11th anniversary of the 2011 Tōhoku earthquake and tsunami.

Here's a brief overview of the 1964 Alaska earthquake:
This exceptionally powerful and historic earthquake registered as a 9.2 on the moment magnitude scale, with a maximum Mercalli intensity of XI (Extreme). 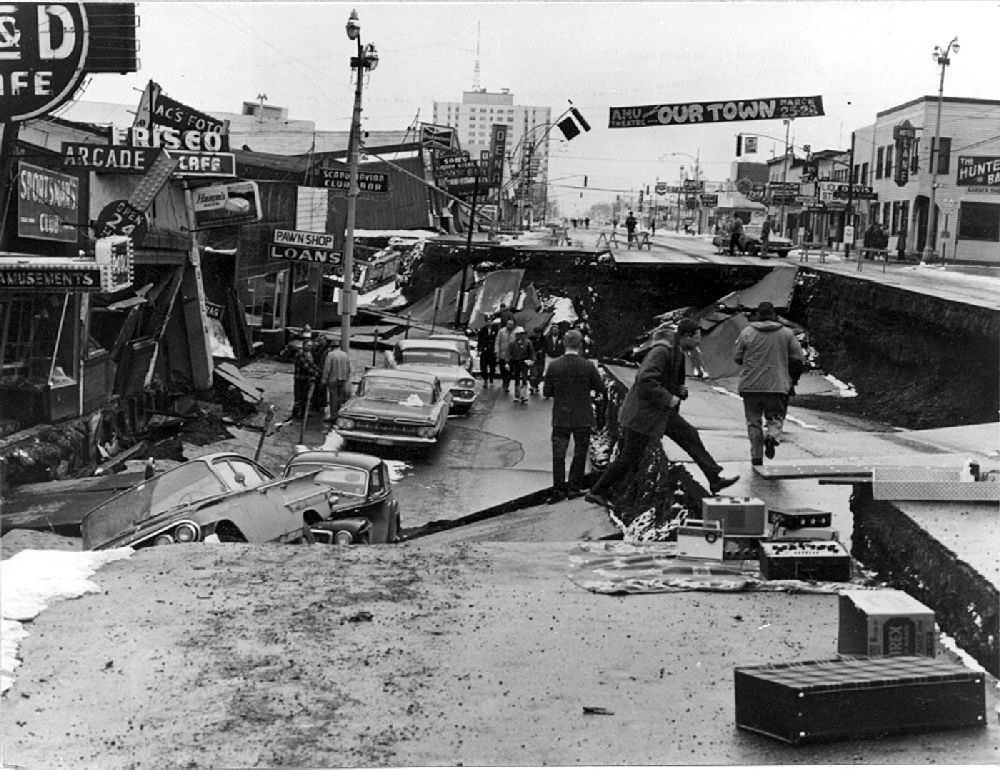 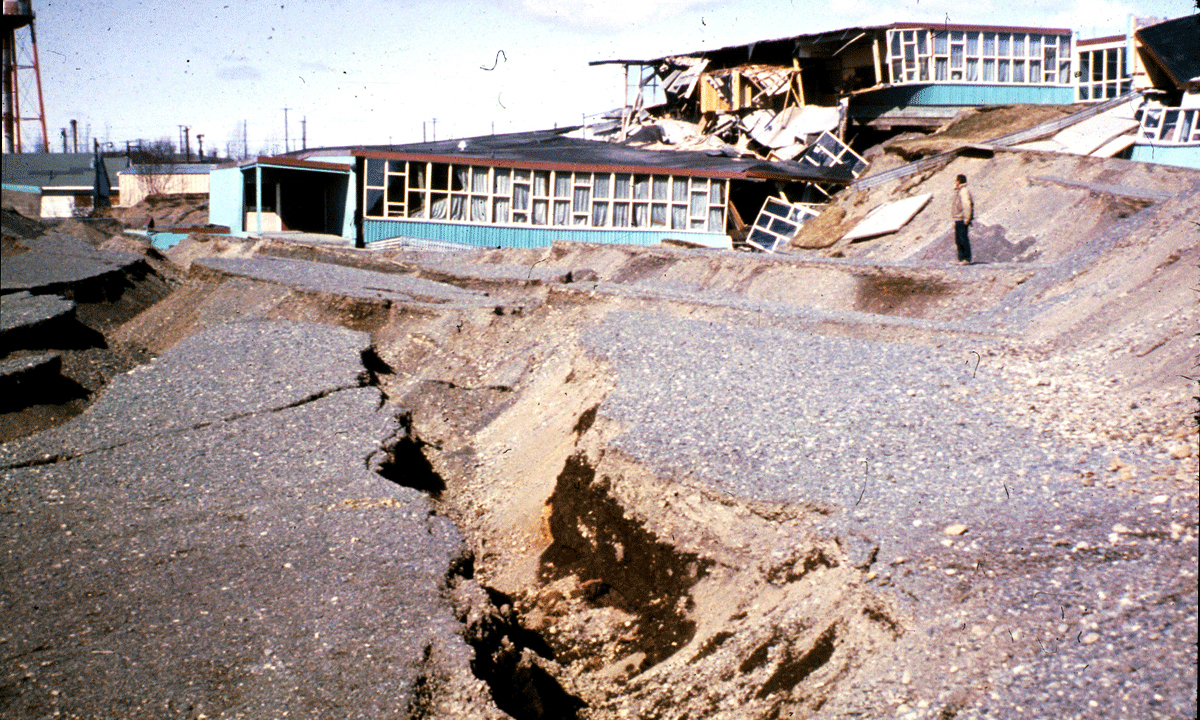 Other inadequately earthquake engineered buildings in Anchorage, such as this JCPenney building, sustained major damage or collapse from the violent shaking. 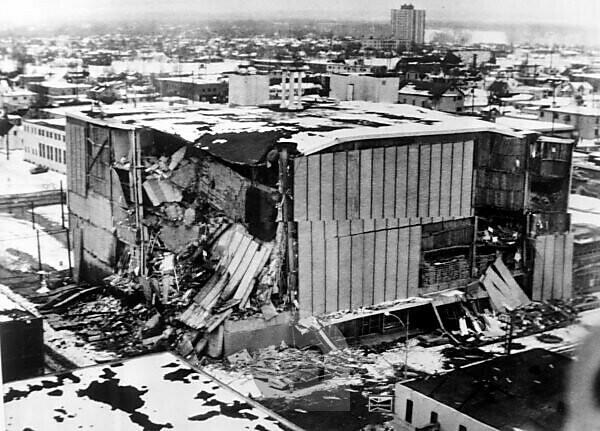 The earthquake was powerful enough to bend railroad tracks in several places. 567 wooden railroad bridges were heavily damaged or destroyed across the state. 34 steel railroad bridges also required major repairs, though none were a total loss. Fortunately, all of the trains running on Alaska's railroad lines managed to stop safely during the earthquake, undoubtedly saving many lives. 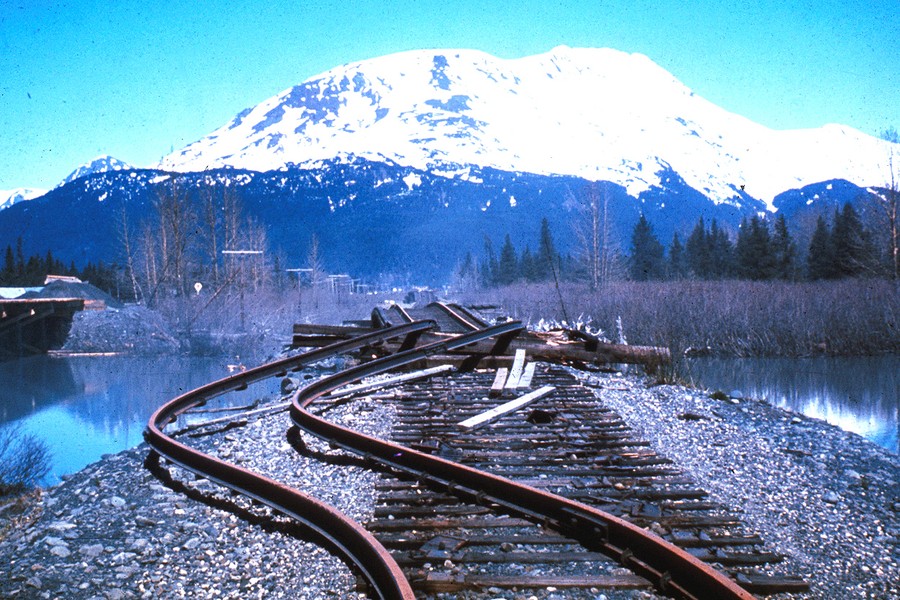 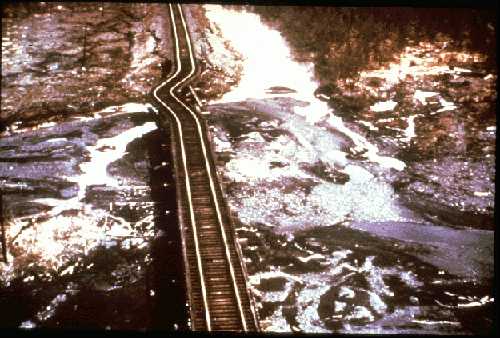 Some towns fared even worse: the entire town of Portage sank by about six feet, putting it below high tide level and leading to its abandonment. 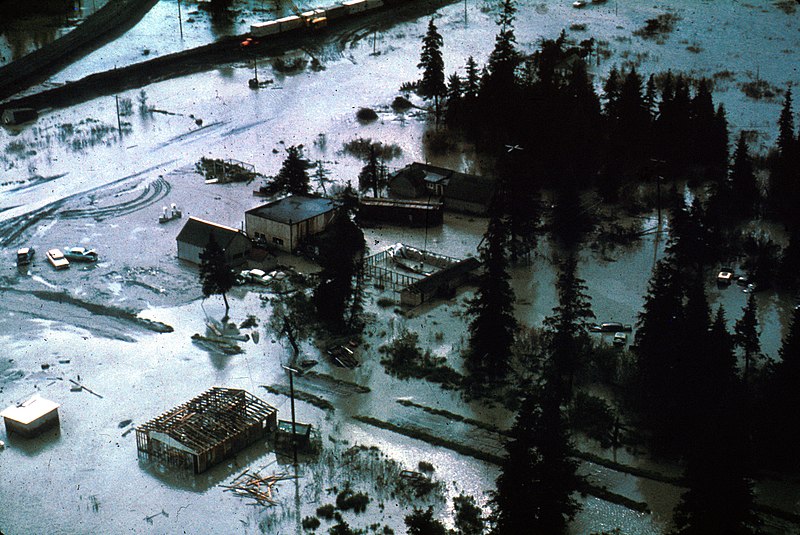 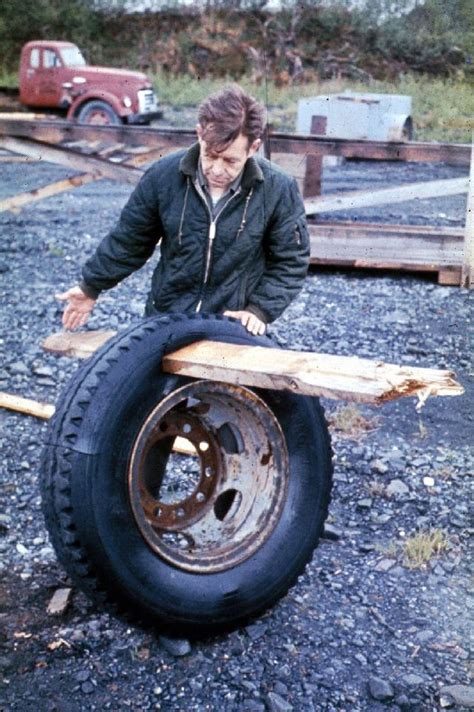 The landslide-generated tsunami that hit Whittier was able to drive a plank through a tire.

Four people died from the tsunami in Oregon, and eleven people were killed in Crescent City, CA in what remains the deadliest tsunami to hit the contiguous United States. 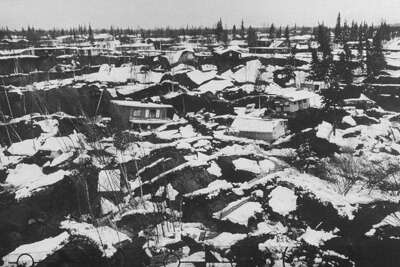 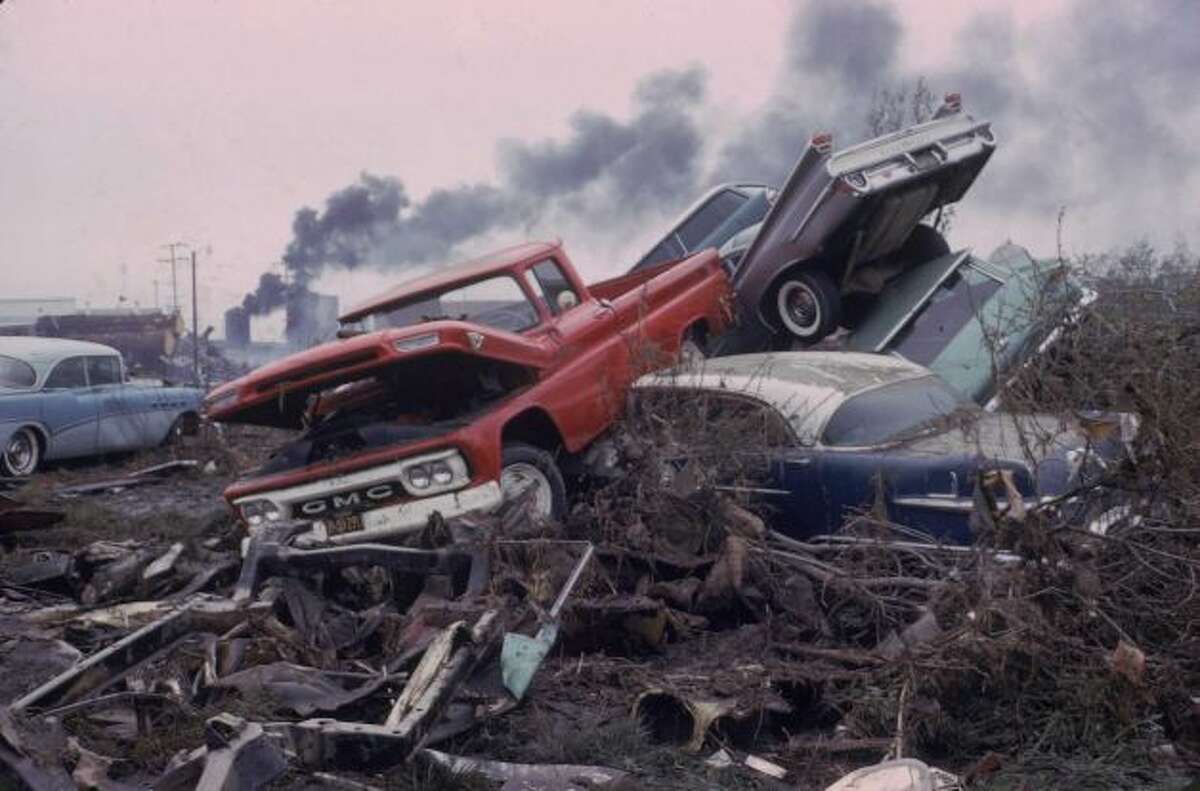 In Oregon (and elsewhere, of course), some are learning from these tragedies and 'transmuting fear into preparedness,' as someone says in this 2017 Public Broadcasting video:


But it's a long haul, and so costly.

That video is Portland-centric, as so much media is. Yet that city, while not representative of the state as a whole, is our major outlet to the outside world, so that's natural for such a topic.

But the rest of Oregon is in for it, too. For example, here in the Valley (where "up" means north, not south as in the Shenandoah Valley), the Resilience Plan (PDF) they mention in the video notes that parts of the region where I live, where the water table is high even though we're 70 miles from the coast, are at high risk for liquefaction. You do see cross-bracing here and other signs of earthquake awareness and action, but I don't know that anyone is prepared for Sulawesi-style liquefaction which this layperson suspects is possible, at least in broad parts of some counties, if not on such a wide scale, given the different topography:


That's not a tsunami traveling inland; it is solid ground turning to thin mud as a seismic wave or waves move inland.

Nowadays evacuation towers are a proposed fix for coastal communities despite the unfortunate example of vertical evac failure in that video (in Minami, I think).

At the time they were building it, I recall reading locally that OSU geologists, including some who are in that video, opposed it, saying the money should be spent to build it outside the tsunami zone. They lost. This whole controversy seems to be memory-holed -- can't easily find mention of it online.

I just hope the tower concept isn't a loss, too, when natural circumstances test it.

It's easy to be all doom'n'gloom when thinking about disasters -- and the Gulf Coast is vulnerable to tsunamis, too -- so here's a tweet from one of the volcanologists currently studying eruption effects in Tonga after that January 15th blast (S-word alert):

Steel beams and reinforced concrete stood no chance against the tsunami's force.

Wave heights along the coast. West-facing coastlines were the most vulnerable and received the worst of the tsunami, experiencing run-up heights exceeding 30 meters in a number of locations.

Yes, that was the one that woke everyone in the 21st century up. I remember that one video where a little English-speaking kid in Thailand was yelling "Tsunami!" while adults were standing around befuddled by the receding sea.

It was at horrible cost, but people know to run now when the sea does that.

At a distance, though, you don't have shaking to give warning. Here's an animation of the thing spreading:


Also info from the USGS and what the geological record shows of Banda Aceh tsunamis. It's not a rare event.
---
Please visit my earth science blog!

Seen this way, it looks like a war among the continents!


Lots of those big tsunami events I didn't know of before.
---
Please visit my earth science blog!

Photos of the destruction of Severo-Kurilsk, USSR 1952. The earthquake that caused the tsunami caused little direct damage being 130 km offshore and at a depth of 20-30 kilometers, but a series of three tsunamis that arrived 15-45 minutes after the earthquake killed 2,336 people in Severo-Kurilsk alone. There the average wave height reached between 50-60 feet high, a Russian source lists the height of the second most destructive wave as 18 meters (59 feet). It is possible the tsunami killed as many as 15,000 people overall. The villages of Usteny, Levashovo, Rifovy, Kamenisty, Pribrezhny, Galkino, Okeansky, Podgorny, Mayor Van, Shelekhovo, Savushkino, Kozyrevsky, Babushkino and Baikovo were all destroyed along with Severo-Kurilsk. Despite the sheer magnitude of the disaster, it received little to no coverage in the heavily censored Soviet press.

The tsunami's impacts were not limited to the Kamchatka Peninsula. In Hawaii wave heights reached up to 15 feet, causing $17 million in damage and considerable flooding. Fortunately, the fatalities were limited to a head of six cattle. Four boats were overturned and sunk in Crescent City, California, and coastal flooding resulted in minor damage elsewhere along the coasts of California, Oregon, and Alaska.

On June 28, 1992, two major yet largely forgotten earthquakes hit southern California. The first shock was the massive magnitude 7.3 Landers earthquake that caused $92 million in damage and killed three people. Many buildings located near and around the epicenter and fault scarping were heavily damaged or destroyed by the intense shaking.

The Hudson residence (located about 20 yards from the four-foot vertical fault scarp) stood no chance despite being well built and bolted to a poured concrete slab foundation. The entire house was heaved off its foundation by about five feet, throwing the walls out of vertical plumb, the reinforced chimney was destroyed, and the slab itself was cracked in places. Plumbing fixtures were also dislodged and furniture was found overturned. This residence became the primary basis for the earthquake's maximum Mercalli intensity rating of IX. 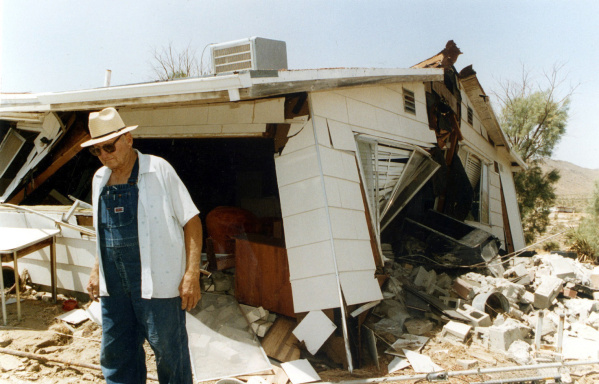 In total, 15 houses were destroyed in the Landers area. In Yucca Valley, a bowling alley sustained collapse of its east wall and portions of its roof. A department store was also heavily damaged. 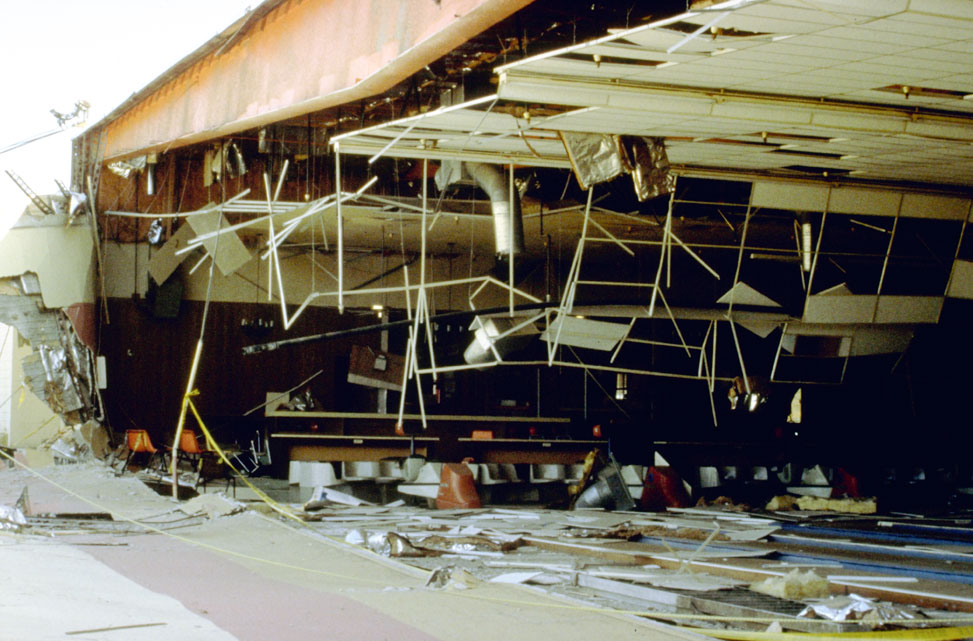 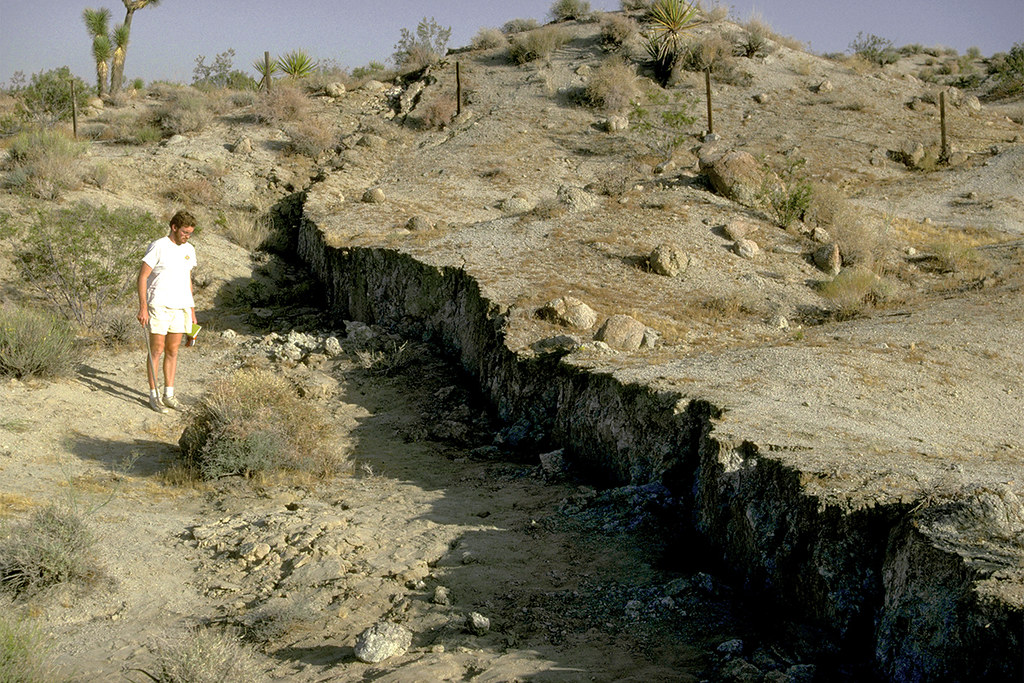 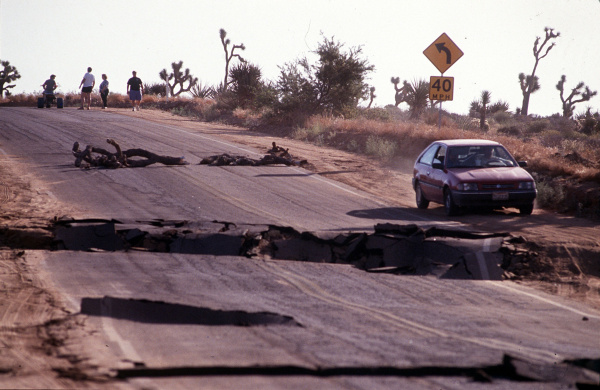 Three hours and 26 minutes later, a second large quake struck Big Bear. Forty percent of structures in the area were damaged including thousands of collapsed chimneys and 20 homes knocked off their foundations. Many fires also broke out, and in both earthquakes, unreinforced masonry structures collapsed. The Big Bear earthquake had a magnitude of 6.5 and was given a maximum Mercalli intensity rating of VIII. 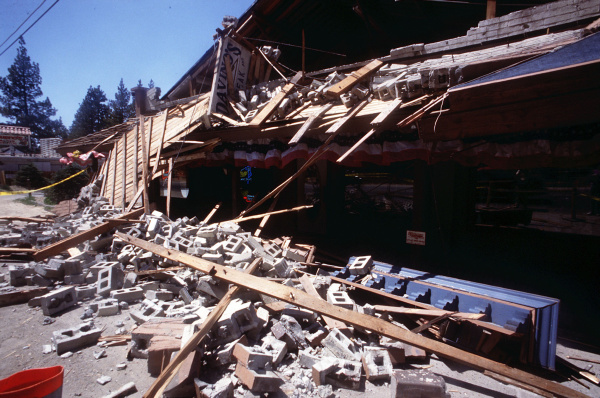 The earthquake caused landslides and rockslides to occur in the San Bernardino Mountains. One huge boulder measuring 16 feet wide covered a distance of 1,000 feet and was airborne (making ground contact only three times before coming to rest) for most of the way down.

Fortunately, this second earthquake resulted in no fatalities, although 63 people were injured. Although initially believed to be an aftershock of the Landers event, it was later determined that these two quakes were part of an earthquake sequence rather than a mainshock and aftershock.
You must log in or register to reply here.