On this date in 1932, a deadly and horrific tornado outbreak struck the deep south (1 Viewer)

On this date in 1932, a deadly and horrific tornado outbreak struck the deep south. Hardest hit were the states of Alabama, Georgia, and Tennessee......similar to the April 27-28, 2011 tornado swarm nearly 80 years later. A total of 334 perished in the deadly tornadoes, most in northern and central Alabama.

The culprit that caused this deady dixie outbreak was a very intense low pressure area that formed over the Texas Panhandle (988 mb) on the night of March 20th, then tracked east to near Tulsa (987 mb) by 7 am March 21st, then ENE across Arkansas to near Evansville, Indiana (984 mb) by evening and Pittsburgh (986 mb) by 7 am March 22nd. 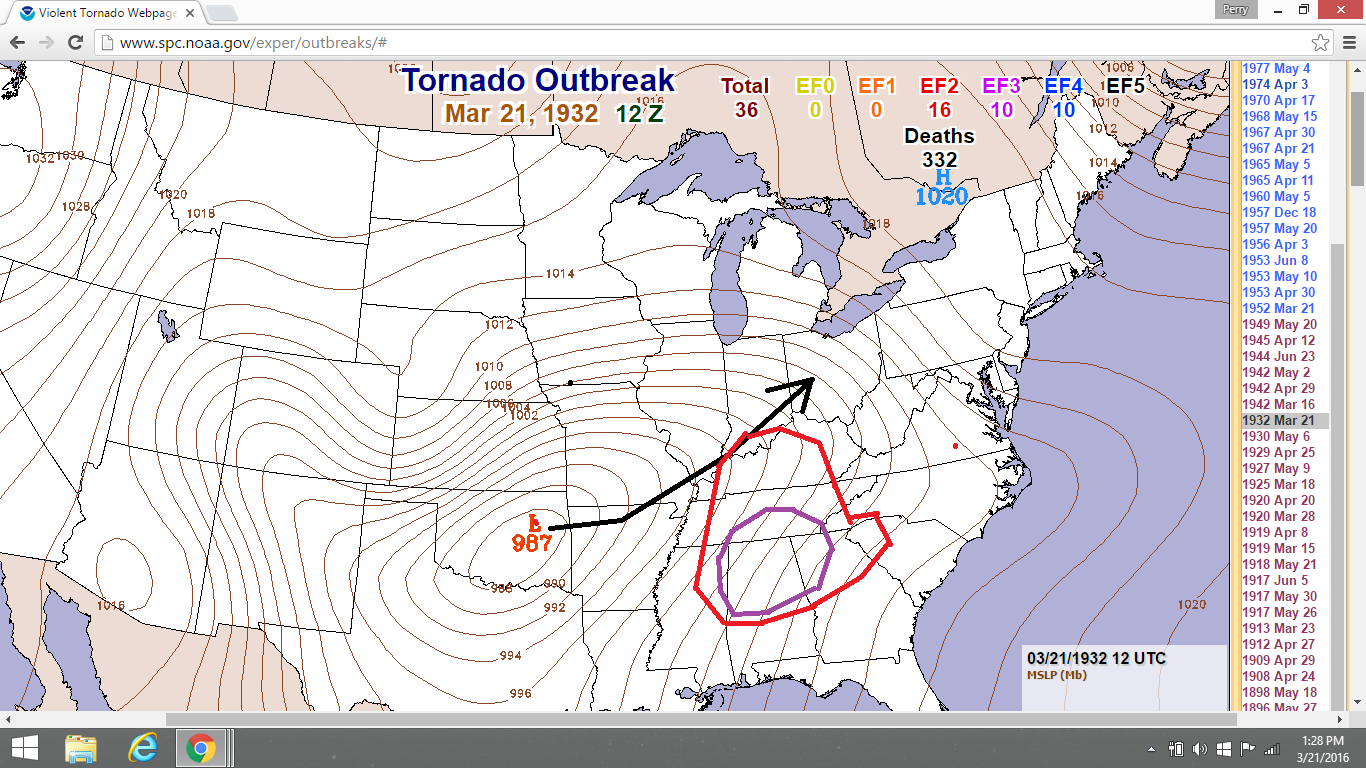 Unseasonably warm and moist air rushed northward ahead of the intense, rapidly moving cold front, spawning waves of violent tornadic supercells.and at least 39 tornadoes, many of them killers. At least ten of the 39 twisters that afternoon and evening reached F4 intensity, 8 of them in Alabama. The deadliest single tornado of the outbreak took 49 lives from near Marion to Jemison, Alabama. Other deadly tornadoes that day struck Talladega county (41 dead), Morgan and Madison county (38 dead), and Northport (37 deaths).

An interesting sidenote to this devastating tornado outbreak. Only a few days before the tornado outbreak, northern Georgia and Alabama shivered in near record cold temperatures (14 at Atlanta; 16 at Birmingham).
Last edited: Mar 22, 2017

My grandmother used to tell me stories about that tornado, she and her family took shelter and didn't have any damage (they lived between Fayettville and Childersburg). However, she told me about a friend's family that (as most stories went in those days) didn't seek shelter till they heard the tornado, two sisters jump into the baby's bassinet or something and were airborne, one sister fussed because the other took all the covers during the ordeal. Their baby sibling was in the baby bed and the roof fell in but did it in a way that formed a shelter over the baby, the baby was completely unharmed. However, their mother was found in two different trees, that's all I'll say. I'm sure that's one horror story of many that people could tell. You can search and find old newspapers online detailing the stories.

My grandfather told us about finding his neighbors dead. He said it was horrific. This was near Lacey's Spring.
TalkWeather Members Do Not See This Ad - JOIN TODAY
You must log in or register to reply here.