SPC has a Day 3 enhanced risk out for Eastern OK and North TX region.
T

Day 2 Enhamced for Eastern OK and Northern TX, with a 10% for tornadoes over that region:

...THERE IS AN ENHANCED RISK OF SEVERE THUNDERSTORMS ACROSS MUCH OF
CENTRAL AND EASTERN OKLAHOMA...AND ADJACENT NORTH TEXAS...

...SUMMARY...
Strong/severe storms are forecast from Sunday afternoon onward
across portions of the southern Plains and vicinity, with large
hail, damaging winds, and a few tornadoes possible.

...Synopsis...
As a large-scale northern-stream trough digs quickly southeastward
out of western Canada into/across the northwestern states, a lead
trough -- comprised of discrete northern- and southern-stream
features -- will eject eastward/east-northeastward across the
central U.S. through the period. Specifically, the northern-stream
low will shift northeastward across Minnesota and into western
Ontario late. Meanwhile, the southern-stream trough will move
quickly out of the Four Corners states into the central/southern
High Plains by afternoon, and then will continue east-northeastward
-- taking on slight negative tilt with time -- as it reaches eastern
Kansas/eastern Oklahoma/East Texas by the end of the period.

At the surface, a cold front will shift southeastward across the
Intermountain West ahead of the digging western upper trough.
Meanwhile, a cold front will move gradually across the Upper
Mississippi/mid Missouri/Kansas and the southern High Plains through
the afternoon. A frontal wave is progged to develop by late
afternoon over western North Texas/southwestern Oklahoma, and then
shift quickly northeastward into Missouri overnight, as the trailing
cold front sweeps quickly southeastward across the southern Plains
through the end of the period.

...Eastern portions of Oklahoma/Texas and vicinity...
As an fairly potent mid-level short-wave trough moves into the
southern Plains region during the afternoon, focused ascent along
the sharpening cold front should result in frontal cyclogenesis in
the north Texas/southwestern Oklahoma vicinity. Daytime heating of
a capped warm-sector, beneath steep lapse rates aloft, will result
in moderate destabilization, with 1000 to 2000 J/kg mixed-layer CAPE
expected across central Oklahoma and southward into Texas by late
afternoon.

At this time, it appears that initial surface-based storm
development will occur in the western North Texas/southwestern
Oklahoma area, during the late afternoon time frame. With
increasingly strong mid-level flow overspreading increasingly strong
low-level south-southwesterlies, and boundary-layer flow backed to
south-southeasterly ahead of the evolving surface low, shear
favorable for supercells, including low-level rotation, suggests
risk for large hail, damaging winds, and -- for the first few hours
of the event -- a few tornadoes, as storms move northeastward into
the central third of Oklahoma and adjacent North Texas.

With time, upscale growth is expected to result in a semi-broken to
continuous line of storms, spreading eastward from southern Kansas
southward into northern/central Texas. Strong/veering flow with
height suggests rotating updrafts will remain possible within the
line, and so a tornado or two will remain possible well into the
evening. Gradually though, risk will trend toward mainly damaging
winds, as the storms eventually reach Missouri/Arkansas/east Texas
through the end of the period.

...Upper Mississippi Valley/western Upper Great Lakes region...
Scattered/ongoing showers and thunderstorms may pose risk for hail
early in the period, with some chance for local instances of hail
near severe levels. Storms will largely spread northeastward across
northern Minnesota and Lake Superior and into Canada through the
day, but isolated, low-topped storm redevelopment -- fueled by
modest heating beneath cool mid-level temperatures -- may occur
during the afternoon. Again, storms could locally pose a risk for
hail, possibly near severe levels in conjunction with a couple of
the strongest updrafts, but at this time coverage of storms appears
likely to remain limited, and thus will maintain only MRGL risk
across this area, through early evening.

All The Tropes: A wiki about everything about fiction you (n)ever wanted to know! (Check out the article for WeatherBrains, and help expand it!)
A

Will the Texas State Fair still be happening when this severe weather event occurs?
TalkWeather Members Do Not See This Ad - JOIN TODAY

it will be winding down after the game but I imagine there will be a lot of people staying overnight to spend the day the fair AND driving back to Oklahoma after the big game. I hope they are listening or it happens late enough for them to get home.

A small SIG SEVERE area has been added in SC OK within the 10% tornado probability zone.
Last edited: Oct 9, 2021

I’m on mobile right now so i don’t know if this will show up right but there is now a moderate risk out with a 15% hatched tornado risk in Oklahoma and a 10% hatched that extends even down into north Texas. This does include the OKC metro and north parts of DFW unfortunately.

MDT was expanded in latest update. 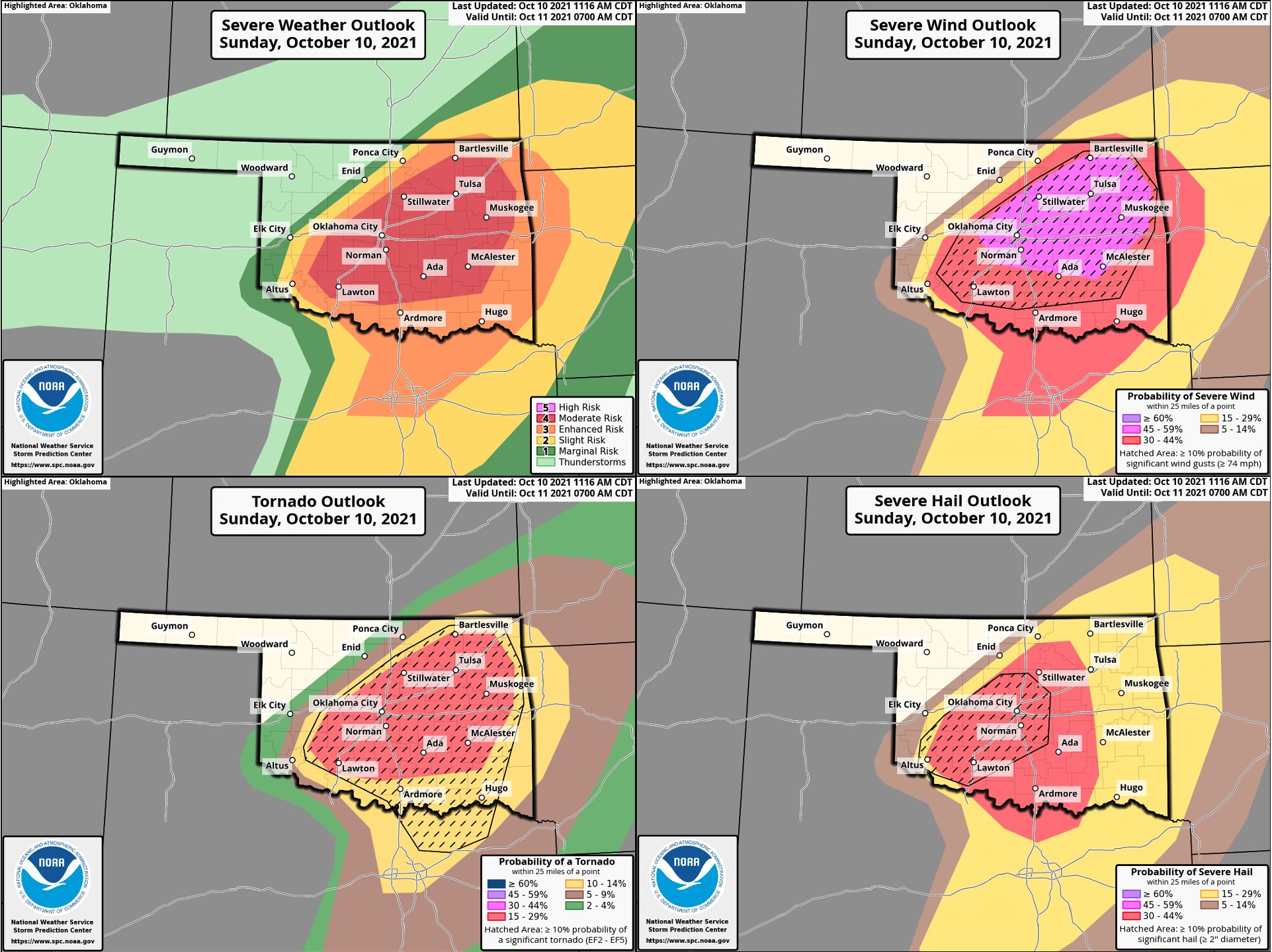 Also, this has been the case for a while, but HRRR's UH is not terribly reassuring.

I know it's still too early to assume anything, but it has been six years since Moore, OK was hit by a tornado... today is definitely a day to keep the weather in mind.

Clancy said:
Also, this has been the case for a while, but HRRR's UH is not terribly reassuring.
Click to expand...

Clancy said:
Also, this has been the case for a while, but HRRR's UH is not terribly reassuring.
View attachment 10475
Click to expand...

Tornado Watch 517 is out. 90/70 tornado probabilities. How is this not a PDS watch?
TalkWeather Members Do Not See This Ad - JOIN TODAY

Not sure what to make of this. Could be overdoing it but on a day like this I wouldn't be immediate to rule anything out:

I know, I know - it's Torcon - but still a little useful for relative comparative purposes.

I think that sounding is contaminated? That's usually the case when you get the crazy vertical velocities in a saturated profile right?

That severe storm thats in Texas has 80 mph wind gusts… wow.
TalkWeather Members Do Not See This Ad - JOIN TODAY

warneagle said:
I think that sounding is contaminated? That's usually the case when you get the crazy vertical velocities in a saturated profile right?
Click to expand...

For some reason the NAM model tends to really go overboard. However I also think the GFS model is underestimating it today.

TH2002 said:
For some reason the NAM model tends to really go overboard. However I also think the GFS model is underestimating it today.
Click to expand...

I think it's just a problem for the non-convection-allowing models since they can't natively resolve the convection? I don't know, I know absolutely nothing about how the models work under the hood.
TalkWeather Members Do Not See This Ad - JOIN TODAY
You must log in or register to reply here.