tornado examiner said:
well. at least its getting an EF3 rating
Click to expand...

Arkansas & Kentucky NWS surveyors say it looks like a middle of the road F1 at the most.

thats actually kinda accurate ngl to what they would say

Surprisingly nasty burst of wind from the complex moving through west AL, lots of close lightning as well
TalkWeather Members Do Not See This Ad - JOIN TODAY

Latest update to the SPC's D1 removes much of Central AL from the ENH. Also notes CAMs having trouble keeping up with the decaying QLCS and its atmospheric implications over parts of MS/AL. Threat appears to remain the same for Eastern AL and GA up into the Carolinas and Virginia.

A large area of severe-thunderstorm potential exists, though more
uncertain now on the southwest side. That part of the outlook is
complicated by a long-lived, quasi-linear convective system now
weakening across portions of southwestern GA and the FL Panhandle,
leaving behind a substantial theta-e deficit over parts of AL and
most of MS. Though now weakening, this activity has progressed
across the region faster and/or much better-organized than almost
all synoptic and convection-allowing guidance has suggested, from
00Z initializations right to the past few hours. For example, the
HRRR overnight consistently has been unable to keep up with reality,
in terms of being too slow with convective speed and too fast to
dissipate the complex. The few progs that have maintained a
better-organized squall line (e.g., the 00Z high-res FV3 CAM) still
were a few hours too slow with convective translation -- but in
planar thermal/buoyancy guidance, more-reasonably indicate the
stabilizing effects of the wake cold pool, when spatially adjusted
eastward.

Favorable destabilization between the outflow boundary (which arcs
well southwestward offshore from AL/MS/LA) and the cold front now
appears more uncertain, though some potential still exists for
either:
1. Strong-severe convection to form along/ahead of the cold front
at some ill-defined southern rim of the favorable large-scale
lift/cooling aloft related to the cyclone, but in a moist layer that
is weaker and shallower than earlier expected, and
2. The outflow boundary to weaken enough for prefrontal/low-level
return flow (especially above the surface) to result in favorable
theta-e advection, especially into the near-coastal southeastern LA
to western Panhandle corridor closest to the remnant boundary.
Given the uncertainties, and the reasonable lack of substantial/
organized activity over the coastal plain behind the MCS in progs
that show it better, unconditional severe probabilities accordingly
have been reduced (but not eliminated) in much of the post-
convective area. Further refinements are likely in this region as
mesoscale trends and later, more-reliable guidance warrant.

Otherwise, the forecast remains largely the same farther north into
1. The Tennessee/Ohio Valley regions, where the influence of
stronger cooling/instability aloft will be more important to
convective potential, and
2. Over the eastern lobe of the outlook encompassing portions of
eastern AL and GA to the Tidewater area, where a weakened MCS will
be less to negligibly influential on destabilization from both
diurnal/diabatic and advective processes. The CAPE/shear parameter
space, especially near the warm front where enlarged hodographs are
probable, still is expected to favor supercells with a relative
maxima of tornado potential both away from the most strongly
stabilized areas of the morning cold pool, and over parts of the
VA/NC Piedmont eastward.
Click to expand...

There was a pretty strong couplet very near Lafitte, LA several minutes ago. Unsure if it was producing a tornado or not as there was no evident CC drop.

Watch likely in parts of GA and FL Panhandle.

Newest D1 trims away ENH in North-Central and NW GA, reduces 10% TOR probs away from ATL metro. CAMs have been showing rather minimal convection in the Western ATL metro so not too surprising.

Any word on yesterday's apparent tornado near Henderson, TX?
TalkWeather Members Do Not See This Ad - JOIN TODAY

Fortunately, there seems to only have been minor injures, but definitely some heavy damage at the Whispering Pines RV Park. The top link has a video of the tornado as well as a number of damage photos. 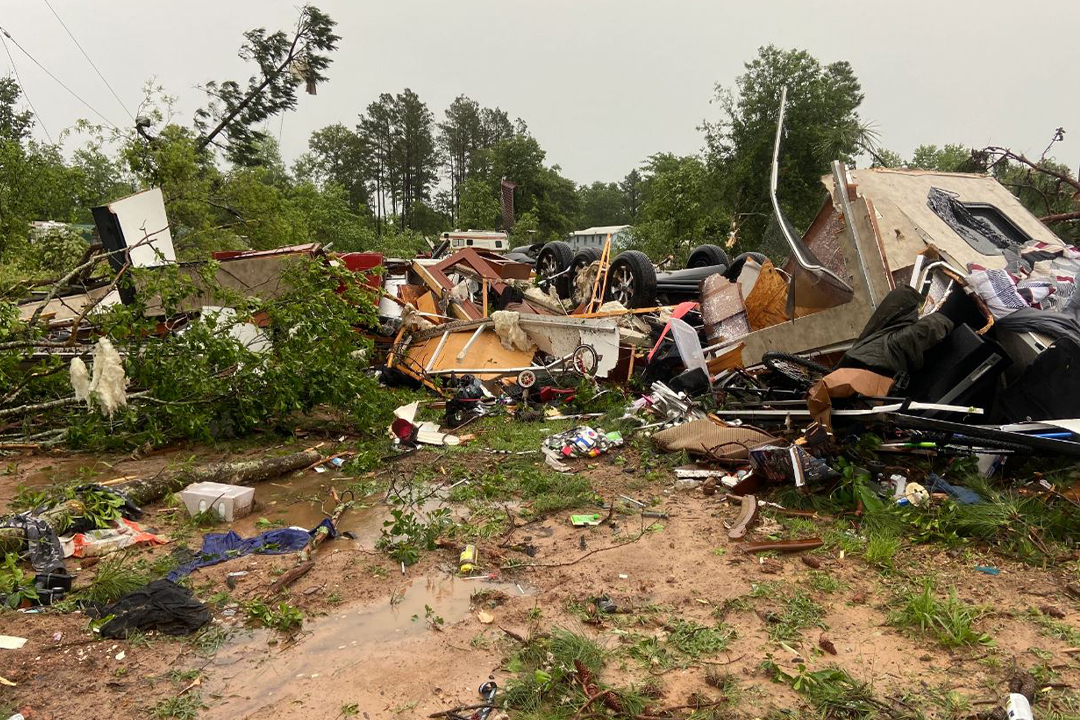 RUSK COUNTY, Texas (KETK) – East Texas first responders saw debris and damage in the area on Thursday due to severe weather. A tornado was seen on the ground in Rusk County, according to a to…

Convection is a no-show here in the ATL metro but it's super windy.
A

Two big tornado watches are now in effect from the Great Smoky Mountains to the Outer Banks and Virginia Tidewater.
TalkWeather Members Do Not See This Ad - JOIN TODAY

Tornado down in Orange County, NC. Major damage reported to at least one building per LSR. Kind of confusing to track though, the couplet isn't that impressive and what appears to be the TDS doesn't always line up with it.

Anyone seeing anything on the tornado warned storm approaching downtown Charlotte?

akt1985 said:
Anyone seeing anything on the tornado warned storm approaching downtown Charlotte?
Click to expand...

Looks like only the ones northeast and north of Charlotte are warned now. Pretty decent couplet on the one at Tobaccoville per KFCX.
TalkWeather Members Do Not See This Ad - JOIN TODAY

This guy has been going for a while:

CheeselandSkies said:
This guy has been going for a while:
Click to expand...

Very healthy supercell.
You must log in or register to reply here.