This one has a tough road ahead.

I think if it can make it past Hispaniola and retain most of its structure, strengthening beyond is possible. Some Euro members are aggressive. 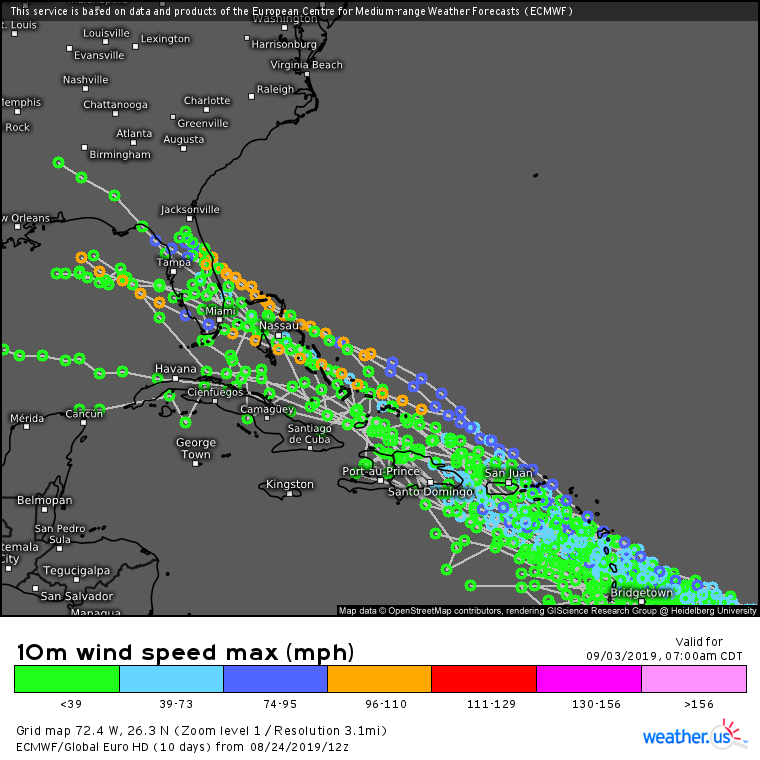 It can always become a serious system again even if it does get tore up. The concern needs to be that its current location, forecast path, and pattern ahead favor a US hit.

This is now tropical storm Dorian.

Visible and passive microwave satellite imagery indicate that the
inner-core of the small cyclone has noticeably improved since the
previous advisory. A 1705Z AMSR-2 overpass showed the development
of tightly curved bands and a 10 mile wide eye-like feature. In
addition, a 1935Z SSMI/S microwave pass revealed a tightly curved
band in 91 GHz data that wrapped almost 75 percent around the
center. Based on the much improved inner-core structure and 33-kt
wind vectors in an earlier ASCAT-B pass, the depression has been
upgraded to Tropical Storm Dorian on this advisory. Upper-level
outflow has been improving to the northwest, but remains slightly
restricted to the southeast due to some modest southeasterly
vertical wind shear.

The initial motion is 280/11 kt. The latest NHC model guidance
remains in excellent agreement that Dorian will generally move
west-northwestward for the next 5 days around the southern periphery
of the sprawling Bermuda-Azores high pressure ridge that is located
to the north of the Lesser and Greater Antilles. This motion is
expected to bring Dorian through the central or northern Lesser
Antilles on Tuesday, possibly as a hurricane, and then into the
northeastern Caribbean Sea on Wednesday and Thursday. The official
forecast track was shifted slightly north of the previous advisory
track, and is close to the consensus model TVCN, which remains north
of the NOAA HCCA corrected-consensus model.

The moderate to strong vertical wind shear that has been hindering
development of this system for the past several days is forecast to
diminish significantly during the next 12 h, and remain near 5 kt
through Tuesday. The low shear conditions, along with warm SSTs and
the significantly improved small, inner-core structure, should allow
for at least slow but steady strengthening despite the abundance of
dry mid-level air nearby. However, the low vertical wind shear and
tight inner-core wind field are also harbingers of possible rapid
intensification. For now, the new intensity forecast remains
conservative and similar to the previous advisory, and is above all
of the available intensity guidance, including the HWRF model.

Key Messages:
1. Dorian is forecast to strengthen and could be near hurricane
strength when it approaches the Lesser Antilles on Tuesday.

2. It is too soon to determine the specific timing or magnitude of
impacts in the Lesser Antilles, but tropical storm or hurricane
watches may be needed for a portion of the area on Sunday.
TalkWeather Members Do Not See This Ad - JOIN TODAY

...DORIAN GETTING A LITTLE BETTER ORGANIZED...

It's got a nice little CDO right over the center of circulation. Despite all of the dry air around, very little shear = no mechanism to infiltrate the circulation with the surrounding more stable air. I.e., just as fast as this may ramp up, it is very sensitive to shear which will begin to increase in the Eastern Caribbean due to a TUTT.

Something to note though, model consensus basically absorbs this energy in a Gulf of Mexico ULL. That may make things tricky down the road, but first it needs to survive potentially hostile conditions prior to the mountainous Hispaniola.

TS warnings are up in the Windward Islands with a hurricane watch in St. Lucia. The NHC seems more bullish on redevelopment after it crosses Hispaniola—I noticed that they shifted the forecast track a bit further eastward over the DR, which might spare it from the highest mountains on the island.
TalkWeather Members Do Not See This Ad - JOIN TODAY

12z model consensus (sans the new GFS) is a Florida hit and Gulf bound...strengthening hurricane at that.
M

I could see this system going right between Puerto Rico and Hispaniola based on the latest trends in the track. I think though because the system has a small circulation, it will degenerate into an open wave if the circulation goes over Haiti. I think the only way it survives a trip over Haiti is if it strengthens rapidly to a large storm. The exact strength and track is key over the next 2 days.

Initial weakness from the newly formed tropical system off the East Coast will help Dorian avoid Hispaniola (or the largest mountains there). That will fill in and shunt the storm back W/WNW with the influence of a cutoff ULL diving WSW over Florida/Cuba and into the Gulf.
TalkWeather Members Do Not See This Ad - JOIN TODAY

Yeah, the model consensus seems to be moving toward keeping the center to the east of Hispaniola, and with it being such a small storm that might spare it from the mountains almost entirely.
M

I don’t feel they have a good grasp on the upper level environment out ahead of Dorian. It seems like the Weather Channel is favoring shear, which would seem logical given the current environment by Hispanola and the NHC discussion is different in believing there will be less shear and more strengthening.

An out to sea option is looking increasingly unlikely as the days go by. While Dorian is quickly gaining latitude thanks to a piece of mid level energy that broke off of TD6 weakening the ridge, that will quickly dive SW and the Bermuda Ridge will quickly fill in. Ensembles are nearly all keyed in on Florida and the majority emerge it into the Gulf of Mexico. A couple of keys to remember, center reformations as it approaches some of the bigger islands of the Caribbean (island-hopping) and that initial bend back to the West. We see this so much with strengthening hurricanes in this region of the Atlantic basin, once that bend west/WSW occurs due to ridging overtop, it tends to remain on a westerly course LONGER than anticipated. Kinda anecdotal, but we've seen it with many storms (off the top of my head: Rita, Katrina, Andrew, Ike, etc). I know those are extreme analogs, but you get my point.

^^^ This is exactly what I was saying about these ULL tandems/westerly track bends tend to result in corrections westward. 12z Euro is leading the way with the shift.
M

Kory said:
^^^ This is exactly what I was saying about these ULL tandems/westerly track bends tend to result in corrections westward. 12z Euro is leading the way with the shift.
Click to expand...

In my humble opinion though, I think the bend back west will occur slightly sooner after it passes Haiti than current thinking assuming it holds together and South Florida is the main target. I am very surprised more of the models don't dissipate this while near Haiti. Besides the fact it will spend time over land (albeit the lesser mountainous parts of Haiti and for only about 12 hours), I have had a hard time envisioning the shear not degenerating it into an open wave.
TalkWeather Members Do Not See This Ad - JOIN TODAY
You must log in or register to reply here.