Less than 48 hours out now. Latest NAM coming more in line with other guidance. RDU special.
"Scratch my back with a lightning bolt
Thunder rolls like a bassdrum note
The sounds of the weather is heaven's ragtime band...."~Jimmy Buffett

Thanks for the first post! Hope to see many more soon. Now, I need 22 inches of snow on the ground in Huntsville
Got Wobble?

Glad Talkweather is back. I don't think we will see the 3 inches that is being advertised by Spann and NWS. I think here in East Alabama we could see an inch or two at the most. My biggest concern from this event is any icy roads and bridges. Glad there is no school on Saturday.

barcncpt44 said:
Glad Talkweather is back. I don't think we will see the 3 inches that is being advertised by Spann and NWS. I think here in East Alabama we could see an inch or two at the most. My biggest concern from this event is any icy roads and bridges. Glad there is no school on Saturday.
Click to expand...

Woohoo!! It's been too long! A perfect way to return talkweather with a pretty much in the bag snow event!

Well let's see what the locals have to say...I'll start with WSB then 11 alive stormtrackers

It's so wonderful to be back home at TalkWeather!! Now we need this event to crank up and test this baby out!!

6z GFS has a huge surprise for GA, both in the form of snow and incredibly cold temps. 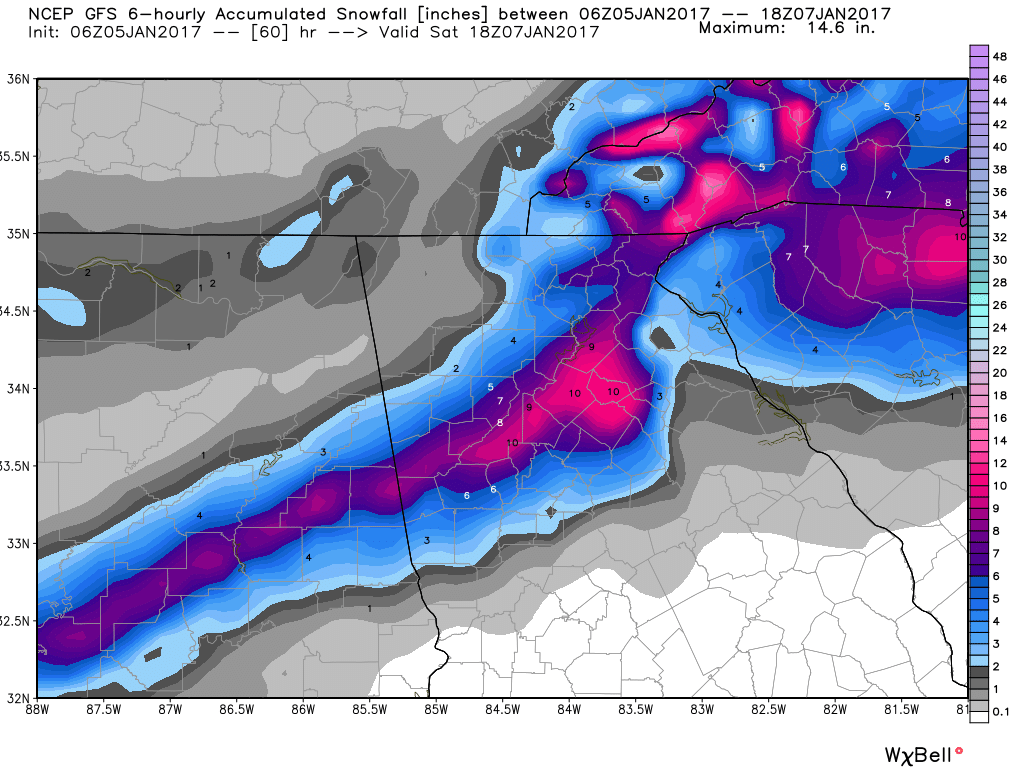 Pretty sure this graphic uses 10:1 ratios. Actual ratios could be in the average of 15:1 range verbatim. GFS has been incredible consistent throughout the past few days....

Brax said:
6z GFS has a huge surprise for GA, both in the form of snow and incredibly cold temps.
Click to expand... 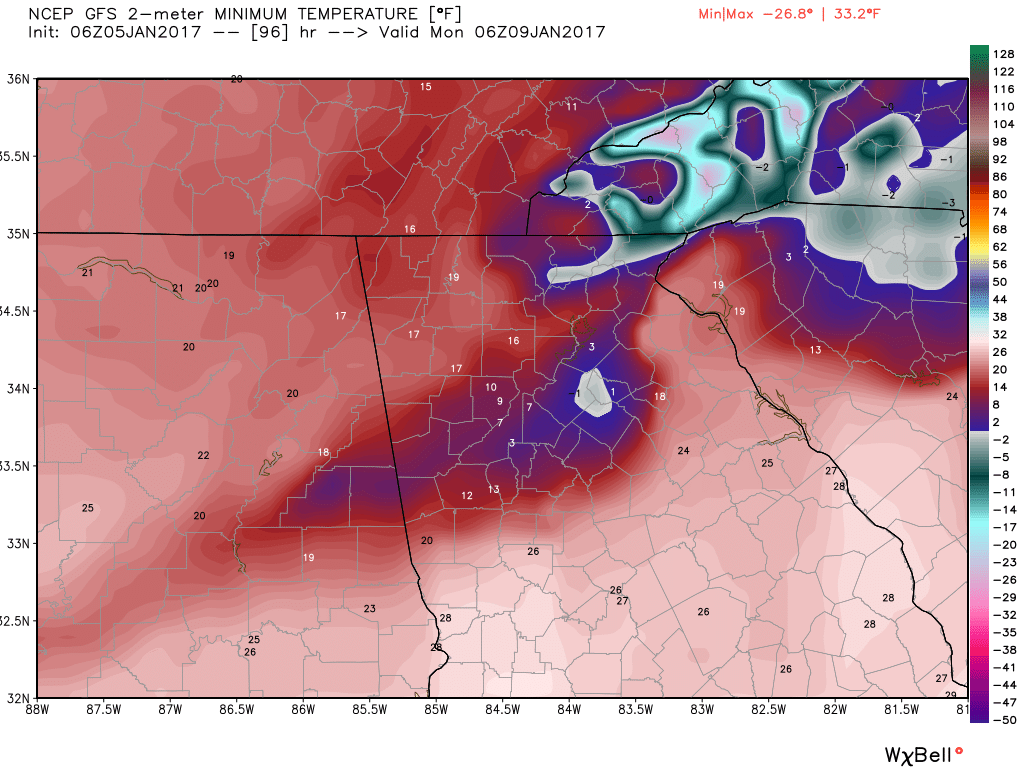 Pretty sure this graphic uses 10:1 ratios. Actual ratios could be in the average of 15:1 range verbatim. GFS has been incredible consistent throughout the past few days....
Click to expand...

Getting nervous a little....that sweet spot has trended a little north each run...

0z was really just a continuation of 18z, just a little north and west.

6z GEFS doesn't give anyone even the least bit of excuse to ditch it.... 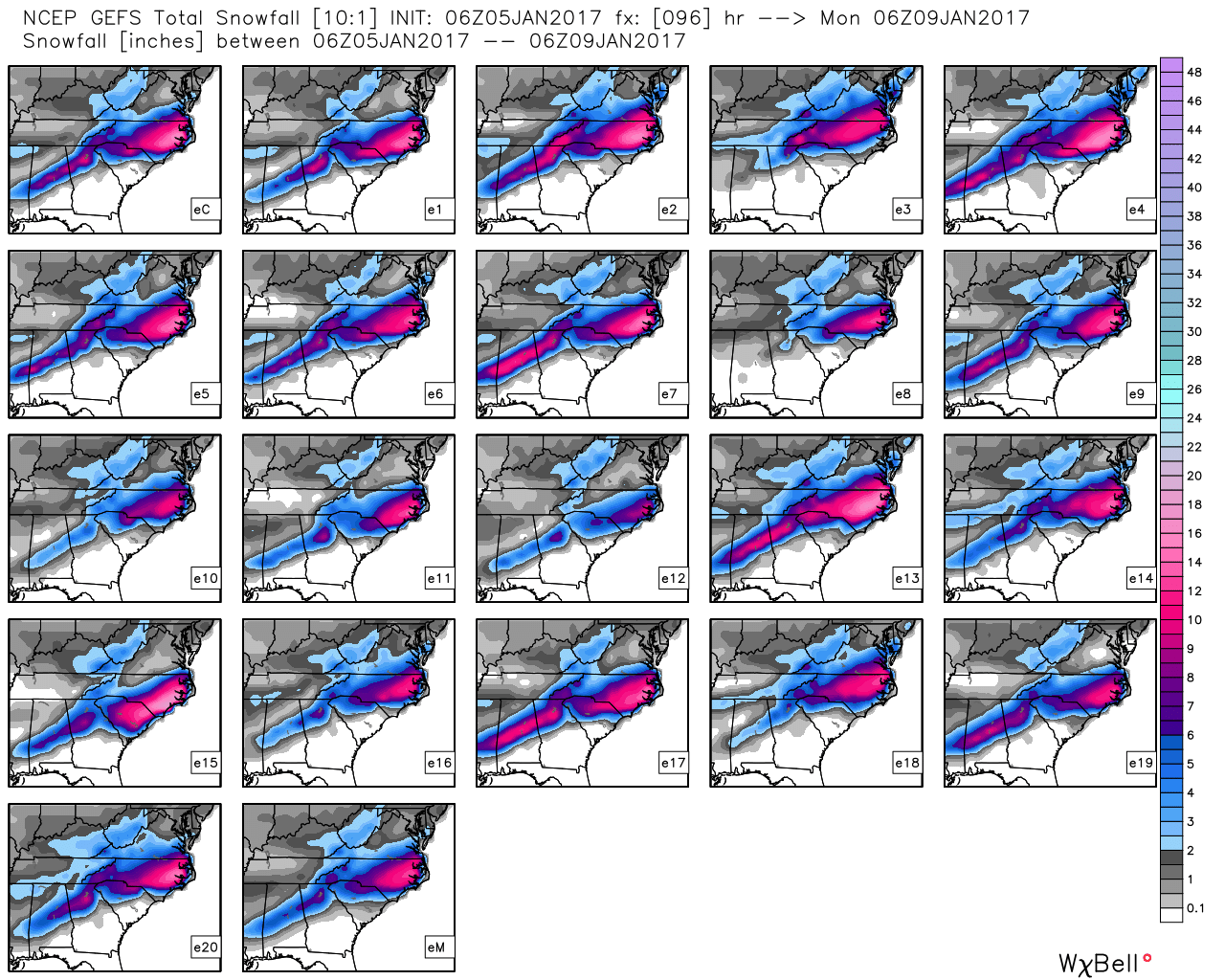 Brax said:
6z GEFS doesn't give anyone even the least bit of excuse to ditch it....

Dang! Look at the consistency in those images!

I'm going to leave this one last little gem before I start getting ready and head in for a bit.... 12" via cobb algorithm for KATL.


Confidence in wintry precipitation with the potential for
significant impacts continues to increase for Central Alabama. The
frontogentical band of snow that the GFS had been showing near the
I-20 corridor continues to trend northward with each run, with the
consensus of other guidance keeping it north of the forecast area.
Will keep in some light accumulations across the far northwest for
continuity, however. More troubling, however, is that the ECMWF
has trended much colder and bit further north with the main
precipitation shield. The 925 mb freezing line and 1300m 1000-850
mb thickness line on the ECMWF is already along a Sumter to
Randolph County line by 12Z Friday morning, reaching a Dallas
County to Chambers County line by 00z Friday night. Meanwhile the
850 mb freezing line on the ECMWF hovers near or just south of the
I-20 corridor all day. The other models are a bit colder with
these features. With this forecast, will continue to indicate a
band of 1-2"+ of snow somewhere near or just south of the I-20
corridor which has the support of the ECMWF and Canadian, a bit
further south than previous forecasts. A small shift in the storm
track will make a big difference for the I-20 corridor resulting
in either higher accumulations or dry conditions. Further south,
between the I-20 and US80-I85 corridors, models indicate heavy QPF
and subfreezing 925 mb temperatures. Forecast soundings for this
region generally indicate rain changing over to sleet and perhaps
snow during the afternoon and evening. Mixed precipitation types
makes the accumulation forecast challenging, as heavy snow would
be possible in this region if sleet does not cut into
accumulations. At this time expect sleet to be the predominant
wintry precipitation type for this area (along a corridor centered
from generally Demopolis to Clanton to Wedowee). Models do
indicate a possibility of freezing rain in this area as well,
potentially as far south of the I-85 corridor. Will add a slight
chance mention of freezing rain to the forecast, but will not
forecast any ice accumulations at this time as forecast soundings
indicate the cold air near the surface should be deep enough to
re-freeze rain into ice pellets.

We will expand the winter storm watch southward to account for the
colder trend and heavier QPF. Southern portions of this watch will
be mainly for the potential for sleet accumulations near the
warning criteria of a half inch. The far northern row of counties
(Jasper, Blount, Etowah, and Cherokee) are a bit questionable but
will keep them in for continuity. An upgrade to a winter weather
advisory (going from Winter Storm Watch to Winter Weather Advisory
is NOT a downgrade) or a winter storm warning may be needed by
this afternoon, and the row of counties south of the new Winter
Storm Watch would have a good chance of eventually being included
in an advisory. Even behind the precipitation Friday night into
Saturday morning, temperatures plummeting into the low 20s and
potentially upper teens across the north will result in the
potential for hazardous travel. Please continue to stay tuned to
for likely continued changes to the forecast.
TalkWeather Members Do Not See This Ad - JOIN TODAY
You must log in or register to reply here.