We found out this worked on the Old Forum to keep random weather posts at bay especially during serious weather outbreaks. Sometimes we may want to vent about the rain, lack thereof, heat, snow or whatever we weather geeks just want to get off our chest weather wise!!

This Spring Severe Wx looks to be quite active...too active

Looking at Weather stations and came across this interesting little device available on Home Depots website for $70. Lightning/severe thunderstorm/tornado detector. It has 5-star reviews but I'm not so sure. 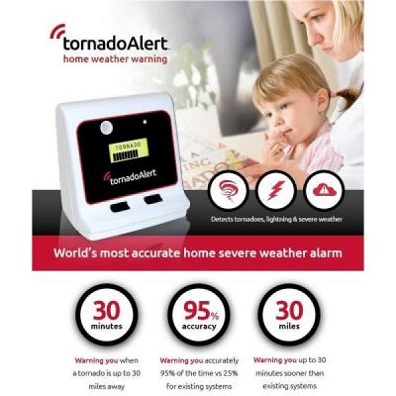 The tornadoAlert is the first new generation warning device that you can easily keep in your home. tornadoAlert safeguards you and your family in three critical ways. Its advanced warning capabilities mean that it warns you sooner than any other similar device. This means you will have up to 30 minutes longer to get to a place of safety and its accurate 95% of the time. By contrast existing community-wide services are accurate only 25% of the time, tornadoAlert is ready to go to work for you and your family right out of the box. We call it Plug and Protect. Plug it in and within 60 seconds it's scanning the skies and protecting you and your family. Although it's only about the size of a coffee cup tornadoAlert packs a big punch. NASA proven principles and methodologies ensure that it is 24/7 vigilant: at night, during power outages and when other warning systems cease to function, tornadoAlert emits a strobe light and a 90 dB warning signal as loud as a jackhammer at 50 ft. You won’t sleep through it. In addition, tornadoAlert is also calibrated to detect incoming severe thunderstorms lightning is still the third biggest weather killer in the United States. Plug-it in. Protect your family now. Some things are too precious to put at risk.

apocalyptic_pleasures said:
Looking at Weather stations and came across this interesting little device available on Home Depots website for $70. Lightning/severe thunderstorm/tornado detector. It has 5-star reviews but I'm not so sure.

I'll see if we can get a demo unit.


Sent from my iPhone using TalkWeather mobile app
Got Wobble?
TalkWeather Members Do Not See This Ad - JOIN TODAY

I'm not sure if this is the proper place to post this, but I was just wondering if there are any particular weather blogs or sites y'all enjoy?

Apparently, a new "weather" movie will be coming to theaters in October. Will you be seeing "Geostorm?"

Here is the Tornado Alert homepage, and their Facebook page. As I suspected, the device primarily uses lightning static (like a lightning detection system).....and algorithms to determine when severe thunderstorms are nearby. It's good in theory, but there are exceptions to the rule (some tornadic storms are accompanied by little lightning; many non-tornadic and non-severe air mass t-storms, typical in the southeast during summer produce frequent/ continous lightning)

I noticed that the SPC's monthly severe weather summary for this year seems to be blank all of a sudden. Is this a bug or does it have to do with the NOAA budget cuts? I'm assuming a bug, I wouldn't think the archiving the severe weather events would cost a lot of money.

South AL Wx said:
Will you be seeing "Geostorm?"
Click to expand...

It is no Twister but anytime you have JJ Abrams group involved I'm interested.

I contacted the company to see if we could get a demo model to try and they e-mailed me back for a phone number and then never called. I'll send another e-mail.
Got Wobble?
TalkWeather Members Do Not See This Ad - JOIN TODAY

So I fully admit one of my favorite past times is watching the famous L.A. Car Chases. They had an interesting one tonight that ended near Hollywood and Vine. However, it was an ad on the KNBC 4 website that caught my attention.

I present to you the KNBC 4 #StormRanger

Meanwhile, up here in Canada, extreme winds of up to 180 kph (112 mph) have ripped through the Avalon Peninsula in Newfoundland yesterday through early this morning. The storm is now officially the most intense to hit the area since 2007, based on the maximum gusts. Luckily no fatalities have been reported so far.

I happened upon a playlist of old-timey tornado aftermath newsreels a bit ago. It's really interesting to see just how much our knowledge of twisters has advanced in 50, 60, 70 years.


"Tornado winds twist at an estimated 500 miles an hour, literally exploding structures as they pass."

Aftermath from the 1956 Hudsonville, MI F5

Silent footage from the aftermath of an outbreak. I'd be interested in knowing which. Maybe Tupelo-Gainesville judging by the high death toll?
TalkWeather Members Do Not See This Ad - JOIN TODAY

I've read the above posts, some cool stuff y'all!! I'm going to watch the old news reels in a bit...

No joke. Devil in the yellow dress.
Got Wobble? 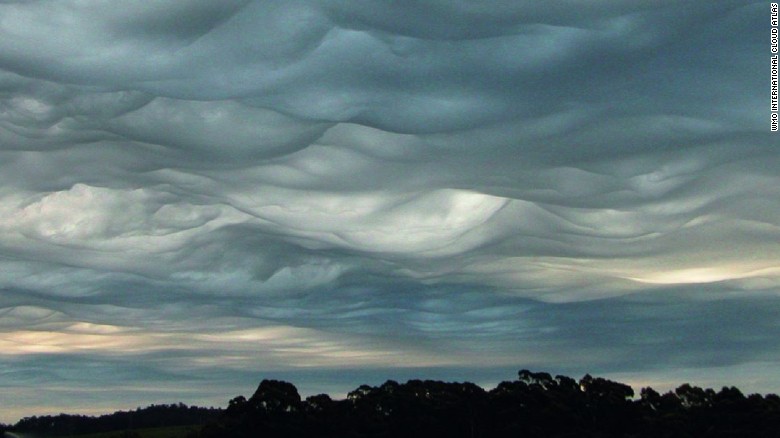 Looking up, you might be thinking you're under a roiling, stormy sea.

But what you're looking at is a unique and breathtaking meteorological phenomenon. And today, World Meteorological Day, it's being officially recognized: asperitas cloud.
This is how the new edition of the International Cloud Atlas describes it, in almost poetic form:
"Asperitas is characterized by localized waves in the cloud base, either smooth or dappled with smaller features, sometimes descending into sharp points, as if viewing a roughened sea surface from below."

What's in a name?
Asperitas comes from the Latin word for roughness.
In 2006, the Cloud Appreciation Society, a group of weather enthusiasts based in the UK, received the first images of the distinctive cloud from Cedar Rapids, Iowa. A few years later, they proposed the cloud be included in the atlas. That would be a huge coup since the atlas is widely used to train meteorologists from the time it was first published in the late 19th century.
"When we know the name of something, we began to know it in a different way and when we began to know it, we began to care about it," Gavin Pretor-Pinney said at a World Meteorological Day ceremony in Geneva.

A big deal
Adding a new cloud type is rare. The World Meteorological Organization had not updated the atlas in 30 years, until now.
Click to expand...

Not too often that I've noticed the PDS TOR shown from the GFS like the NAM often shows. Looks like NWS is going with EURO for late weekend and expecting heavy rain so far.

I am a fan of Bob's Burgers on FOX. The humor is funny without being too over the top like Family Guy. Which is why I was shocked to hear an April 27, 2011 tornado joke on the show. I do wonder if one of the writers is from Alabama. Here is the link

I'm an "armchair chaser", but I didn't follow today's system since I was fairly sure it would bust...Big mistake, I'll definitely be paying closer attention to the next one.
TalkWeather Members Do Not See This Ad - JOIN TODAY

I finally got to try Top Hat Barbeque today in Hayden, which is north of Birmingham. The reason I know about the place is that James Spann always mentions this place whenever a tornado is passing between Warrior and Mulberry Fork. The pork was good but next time I will ask for their red sauce on the side.
You must log in or register to reply here.