...THERE IS A MODERATE RISK OF SEVERE THUNDERSTORMS THIS
AFTERNOON/EVENING FOR EASTERN WY...NORTHWESTERN NE...AND
SOUTHWESTERN SD...

...THERE IS AN ENHANCED RISK OF SEVERE THUNDERSTORMS SURROUNDING THE
MODERATE RISK AREA...FROM NORTHEASTERN CO TO NORTHEASTERN WY AND
WESTERN SD...

...THERE IS A SLIGHT RISK OF SEVERE THUNDERSTORMS FROM THE NORTHERN
ROCKIES TO THE MIDDLE MO VALLEY AND WI...

...THERE IS A MARGINAL RISK OF SEVERE THUNDERSTORMS FROM THE
NORTHERN ROCKIES TO LOWER MI...

...THERE IS A MARGINAL RISK OF SEVERE THUNDERSTORMS THIS AFTERNOON
ACROSS PARTS OF ME...

...THERE IS A MARGINAL RISK OF SEVERE THUNDERSTORMS THIS
AFTERNOON/EVENING FOR PARTS OF WEST TX...

...Central/northern High Plains this afternoon into tonight...
On the southeastern periphery of the closed low over NV, a 70+ kt
midlevel jet streak will eject northeastward to the northern High
Plains tonight. A related lee cyclone will deepen across northeast
CO by this evening, before translating to central NE/SD by the end
of this forecast period. Initial boundary-layer dewpoints in the
low 60s will spread northwestward from northeast CO into eastern WY
today as low-level upslope flow strengthens in response to lee
cyclogenesis. Daytime heating within this upslope regime, beneath
steep midlevel lapse rates, will drive moderate-strong buoyancy
(MLCAPE of 2000-3000 J/kg) and weakening convective inhibition by
mid afternoon. A special NSSL sounding from Cheyenne WY at 12z
revealed a 100-mb mean mixing ratio of 12.5 g/kg and only a weak
cap.

Thunderstorm development appears likely by early-mid afternoon from
just northeast of the lee cyclone in CO northward to the east slopes
of the Laramie and Big Horn ranges. As buoyancy increases through
the afternoon, both deep-layer and low-level shear (i.e., hodograph
length and curvature) will also increase, resulting in a favorable
environment for tornadic supercells. The initially discrete
supercells will pose a threat for isolated strong tornadoes and very
large hail, while eventual mergers/upscale growth will result in an
increasing damaging-wind threat as storms spread from WY into SD.

...Northern Rockies this afternoon/evening...
A gradual increase in low-level moisture will occur today as far
west as southwestern MT. Convection is expected to form over the
high terrain by early-mid afternoon and spread northward, as
large-scale ascent increases in advance of the ejecting midlevel low
now over NV. Weak-moderate buoyancy and substantial deep-layer
southerly shear will support a threat of organized/supercell storms
capable of producing isolated large hail and damaging gusts.

...Mid MO Valley to the Great Lakes through tonight...
Isolated strong/severe storms have formed this morning in
eastern/southeastern NE in a zone of low-level warm advection on the
nose of the steepest midlevel lapse rates. Though the low-level jet
will weaken some later this morning and the ongoing storms could
likewise weaken, lingering outflow boundaries could also provide
some focus for additional storm development this afternoon.
Otherwise, scattered thunderstorm development is expected on the
synoptic front farther to the north, from southeastern SD eastward
near the IA/MN border. One or more thunderstorm clusters could pose
a large hail/damaging wind threat along this corridor. A couple of
tornadoes with more discrete storms will also be possible, given the
narrow corridor of somewhat enhanced vertical shear along the
boundary. Weaker buoyancy and vertical shear suggest that the
severe-storm threat will diminish with eastward extent into Lower
MI.

...Maine today...
A series of remnant/subtle MCVs will move from the Great Lakes to
Maine today and potentially help focus storm initiation.
Boundary-layer dewpoints in the 60s and surface heating in cloud
breaks will drive potentially moderate buoyancy this afternoon, and
deep-layer unidirectional wind profiles with substantial speed shear
could support some storm organization/supercell structures. The
strongest storms may produce isolated large hail and/or damaging
gusts.

...West TX this afternoon/evening...
Strong surface heating/mixing on the west edge of the richer
low-level moisture should support at least widely-scattered
thunderstorm development late this afternoon from parts of the
Trans-Pecos to the Caprock. Moderate buoyancy, a deep mixed
boundary layer, and modest deep-layer vertical shear could support a
few marginal supercells capable of producing some hail/wind.

The SPC has issued a Day 1 Moderate Risk for parts of Wyoming, Nebraska and South Dakota, with a 15% hatched area for tornadoes. Not the best setup by a long shot, but I figure a moderate risk is worth a thread.

Impressive percentages on this PDS watch just out

Many reports of confirmed tornadoes.
TalkWeather Members Do Not See This Ad - JOIN TODAY

That video they showed on TWC a few minutes ago was wild. Very violent rotation at the ground. Reminded me of the video from Katie, OK last year.
D

Matt Magiera has a TOG near Kimball, Nebraska. 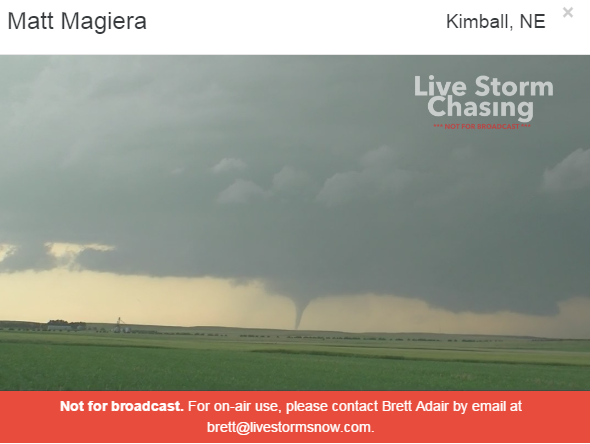 That southern supercell looks like it's moving into an even more favorable environment.
TalkWeather Members Do Not See This Ad - JOIN TODAY

TornadoFan said:
That southern supercell looks like it's moving into an even more favorable environment.
Click to expand...

That storm looks amazing. Looks like a tornado producing machine.
A

It looks like there could be severe storms across parts of Tennessee and Alabama on Thursday.
TalkWeather Members Do Not See This Ad - JOIN TODAY
You must log in or register to reply here.