The GFS, NAM, and EURO show a severe weather threat Monday, November 12th, but defer on how far the threat extends inland. The EURO has been adamant about getting it further north into central Alabama, and Georgia, whereas the GFS, and NAM have been hesitant to bring the threat inland until recently. They only get areas such extreme southern LA, MS, AL, GA, and northen FL, and the panhandle in on the threat. Regardless, with either solution there looks to be a heightened threat along an area near the surface low riding the warm front.
Last edited: Nov 10, 2018

There are two areas that could get really interesting tomorrow, and it looks quite possible. The first one being southern LA, MS, AL, GA, and the Florida panhandle. Then the other being coastal South Carolina, and North Carolina.
Last edited: Nov 11, 2018

...THERE IS A SLIGHT RISK OF SEVERE THUNDERSTORMS ACROSS MUCH OF THE
CENTRAL GULF COAST...

...SUMMARY...
A few severe storms are possible on Monday across the central Gulf
Coast, and across the coastal Carolinas Monday night.

...Synopsis...
Deep, positively tilted upper trough is expected to move eastward
throughout the period while amplifying. By 12Z Tuesday, this large
upper troughing will likely feature more distinct northern and
southern shortwave troughs than earlier in the period, with the
northern shortwave centered over the upper Great Lakes and the
southern shortwave extending from the Ozark Plateau into the TX Big
Bend. Deep southwesterly flow will exist throughout the eastern
periphery of the parent upper trough, gradually spreading eastward
as the overall system shifts eastward and eventually extending over
much of the eastern CONUS.

...Central Gulf Coast...
Strong moisture advection ahead of the approaching surface low will
contribute to air mass destabilization across the region,
particularly along the immediate coastal areas which are expected to
be in the upper 60s to low 70s. Even so, limited insolation and poor
lapse rates will result in generally moist, weakly unstable
profiles. Strengthening southwesterly mid-level flow mentioned in
the synopsis will be accompanied by a fairly robust low-level jet,
resulting in moderate to strong deep-layer shear and long
hodographs. Positive tilt to the upper trough and the resulting lack
of stronger height falls will likely contribute to a fairly messy
storm mode with weak but broad forcing for ascent across the warm
sector. Given the potential for backed surface winds, the best
chance for a low-topped supercell and brief tornado exists within
any warm-sector confluence bands that develop ahead of the
approaching surface low (and attendant cold front) during the early
afternoon. Damaging wind gusts are also possible in this area as
well as along the front where updraft intensification is possible as
a result of cell mergers and/or frontal circulations.

...Coastal GA/Carolinas...
There is a bit more uncertainty regarding how far inland the warm
sector will develop across this region versus the central Gulf
Coast, largely as a result of differences within the guidance on the
location of surface cyclogenesis. Not only that, but significant air
mass modification is needed to produce an environment supportive of
thunderstorms. Highest likelihood is for this to occur along the
coastal areas of GA, the Carolinas, and far southeast VA with a
resulting potential in these areas for surface-based storms.
Kinematic environment characterized by moderate to strong deep-layer
shear and vertically veering low-level winds supports the potential
for updraft rotation with the more persistent warm-sector storms.
Corresponding threat for a brief tornado and/or damaging wind gusts
is possible with any of these low-topped supercells.

Tornado on water probably with that storm south of Gulf Breeze. Watch it closely as it is about to come onshore.

The National Weather Service in Mobile has issued a

* At 859 AM CST, a severe thunderstorm capable of producing a tornado

shelter. Mobile homes will be damaged or destroyed.

Damage to roofs, windows, and vehicles will occur. Tree

* This dangerous storm will be near...

Gulf Breeze and Pensacola Beach around 910 AM CST.

Oriole Beach around 920 AM CST.

and protect yourself from flying debris.
TalkWeather Members Do Not See This Ad - JOIN TODAY

...A TORNADO WARNING REMAINS IN EFFECT UNTIL NOON CST FOR

At 1124 AM CST, a severe thunderstorm capable of producing a tornado

was located over Oriole Beach, or 6 miles east of Gulf Breeze, moving

shelter. Mobile homes will be damaged or destroyed. Damage

to roofs, windows, and vehicles will occur. Tree damage is

This tornadic thunderstorm will remain over mainly rural areas of

and protect yourself from flying debris. 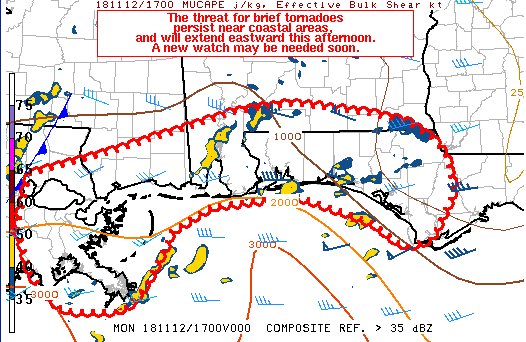 There’s been a pair of two rotating supercells over the water south and west of Panama City, and Mexico Beach for a long time. They look to be moving onshore soon.
TalkWeather Members Do Not See This Ad - JOIN TODAY
You must log in or register to reply here.