For Atlanta, it seems the RAP, HWRF (all flavors) and NAM are trending more toward the HRRR which is a bit scary. NAM 3km still holding off. Either way, at this point, I don't see a reason I won't be chasing west of Atlanta later today.

KoD said:
Doesn't look like it's initializing well regarding the northern part of the qlcs, the timing is off by hours. Personally I don't buy the line changing into a semi-discrete storm mode as shown but it may be onto something. There is a lot of convection starting to pop up in front of the line further south in MS so I'm led to believe it could get to be pretty messy. We'll have to wait and see.
Click to expand...

Your right. It's way off on timing, so that makes me less likely to rely on it for future events right now. Since the northern AL portion of the line has speeded up, I wonder if that has thrown off the model, since it ingest's radar data? Maybe it will reset in the next hour or two?

GA Stormchaser said:
Your right. It's way off on timing, so that makes me less likely to rely on it for future events right now. Since the northern AL portion of the line has speeded up, I wonder if that has thrown off the model, since it ingest's radar data? Maybe it will reset in the next hour or two?
Click to expand...

I think the 14z run will reflect the current scenario keep in mind the lines has slowed down, so I don't think there will be much difference except in the far northwest corner where storms briefly moved in

Richardjacks said:
I think the 14z run will reflect the current scenario keep in mind the lines has slowed down, so I don't think there will be much difference except in the far northwest corner where storms briefly moved in
Click to expand...

Yep, looks like the line in Central MS has slowed a touch...

It still quickly advects a volatile atmosphere into western and central Alabama over the next few hours.

Kory said:
It still quickly advects a volatile atmosphere into western and central Alabama over the next few hours.
Click to expand...

Yes and has the line only to Tuscaloosa at 1pm! further slowing...

14z HRRR does seem to keep the line more linear than earlier HRRR runs were.

This is the HRRR at 2pm CST. Line is just approaching Tuscaloosa.

Jason Simpson about ten minutes ago:
I was a little confused earlier this morning when they pulled the enhanced risk back to the south and now they've pulled it back up to the north ...

Lot of junky looking convection in far SW AL/SE MS where mesoanalysis is showing little if any cap, but with lightning and echo tops passing 20kft, wonder if anything can develop within some of that

Aloft, a potent upper level trough extended from the High Plains
south through Northern Texas. The trough is expected to attain a
more negative tilt later today as it swings northeast over the Mid
South region. To our southeast, an expansive deep-layer ridge was
positioned southwest of Bermuda.

Toward the surface, a cold front extended from Southeast Canada
southwest through Michigan and further south through the Central
Ohio River Valley into West Tennessee and through West-Central
Mississippi down to the Gulf Coast.

A second tornado watch is in effect until 4 pm CST for areas
toughly along and west of Interstate 65 along with St. Clair
County but not including Montgomery County at this time. The
existing tornado watch for 5 northwest counties of Marion,
Winston, Lamar, Fayette and Walker remains in effect until 1 pm
CST.

A line of strong to severe storms now extend from Northwest
Alabama southwest to east of Jackson, MS. General shower activity
was noted on radar across portions of East Mississippi and West
Alabama.

Comparing RAP soundings to observations the T/Td fields appear to
be running about 3 degrees too cold on temperature and around 1
degree too dry for dew points. Adjusting the point forecast
soundings at MEI and CBM are indicating much higher instability
values than depicted by the model, on the order of 30-50% higher
surface-based instability values. This is being exhibited by
recent deep convective development ahead of the line in South-
Central Mississippi west of Meridian.

KBMX NEXRAD VAD VWP wind profiler data along with our latest 15Z
BMX sounding both indicate a highly sheared environment with 0-1
km Storm relative helicity values from 250-350 m2/s2. Wind shear
remains robust and is more than sufficient to support severe
storms capable of producing high winds and embedded tornadoes in
the line along with in any discrete convection that can develop
ahead of the line.

The convective line is being dynamically forced and will pose the
broadest concern for high winds. Surface-based instability values
are currently the limiting factor for supporting robust
development ahead of the forced line of storms.

Higher instability (Surface-Based Convective Available Potential
Energy, SBCAPE) values around 500 J/kg per mesonanalysis data was
over our far southwest counties and is expected to advance north
and northeast with time through mid morning. As aforementioned,
our analysis of data shows that these model-derived soundings are
running slightly cooler and drier compared to observations and
accounting for these issues results in SBCAPE values closer to the
700-1100 J/kg range. As the low-level instability continues to
increase and further moistening aloft in the mid levels should
help to further steepen lapse rates and reduce the weak capping in
place over the area.

So far the stronger isolated cells that have formed ahead of the
line have been observed interacting with and being absorbed into
the line and then posing a tornado threat. We will be watching the
behavior of new deep convection west of Meridian very closely to
see how it interacts with the line of storms.

We have completed the 12Z sounding and the 15Z sounding will be
fully completed soon. We hope to launch an 18Z sounding if
conditions permit locally.

Well there we go. Models never resolve T/D quite right in the cold season. Given the ridiculous advection that doesn't shock me

Echo tops about to hit 30kft northeast of Mobile

BHM's discussion dovetail's well with the SPC's latest MESO. Here is a portion of it.

Given the linear nature of the ongoing convection across eastern MS
and the enhanced flow present at low levels, damaging winds will
probably be the main severe threat in the short term. However, the
airmass downstream is expected to continue destabilizing through the
remainder of the morning and into the early afternoon, with MLCAPE
of 1000-1500 J/kg potentially developing across parts of western AL.
Very strong low-level shear, with effective SRH of 400-600+ m2/s2,
suggests that low-level mesocyclones embedded within the line will
be capable of producing tornadoes. The potential for supercells
either within the line or just ahead of it remains unclear. But, if
supercells do develop, then strong tornadoes will be possible,
especially with eastward extent into AL where the most favorable
thermodynamic and kinematic environment will likely exist this
afternoon.

they are taking their time on new Day 1

Richardjacks said:
they are taking their time on new Day 1
Click to expand...

Just saw it.... pretty lame IMHO. Meaning, not a lot of "meat" in the discussion.

Richardjacks said:
they are taking their time on new Day 1
Click to expand...

Here is the new Day 1 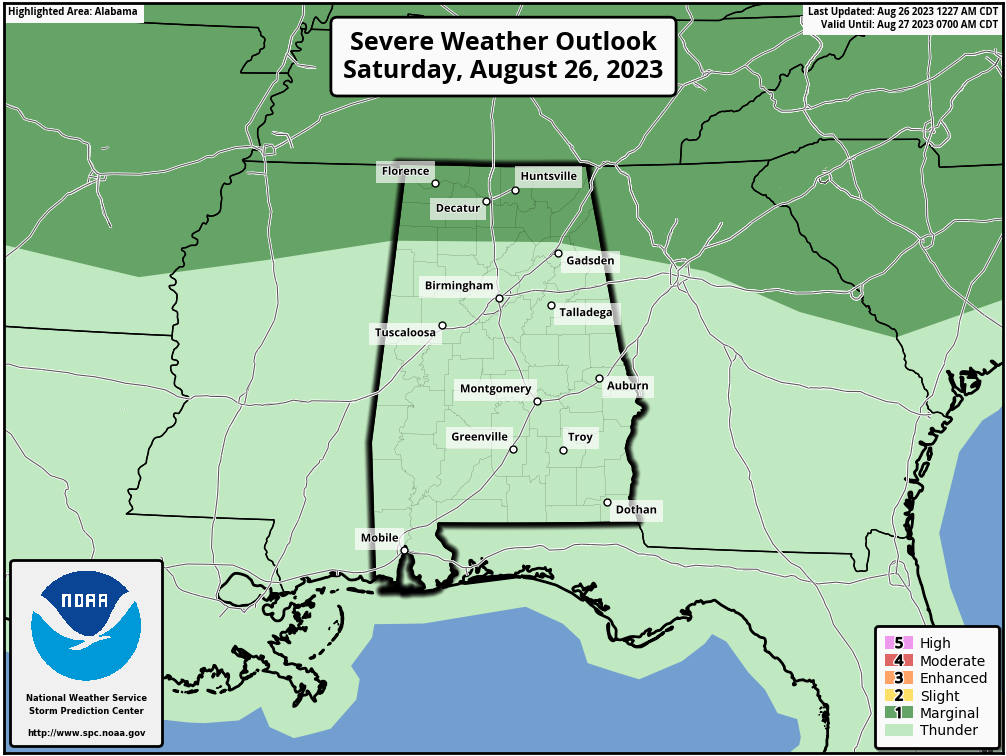 10% hatched area for Tornadoes including BHM and TCL. 30% for Wind.