MIAMI, Florida - NOAA's National Hurricane Center issued a Tropical Weather Outlook at 2 p.m. Eastern Daylight Time on Tuesday, August 29, 2017, due to the presence of an area of low pressure that could become a Tropical Storm Jose later this week.


The area of low pressure (red X above), dubbed Invest 93L, is located near the Cabo Verde Islands.

Showers and thunderstorms associated with Invest 93L have become better organized since yesterday and will likely form into Tropical Depression 11 by Thursday over the eastern Atlantic.

NHC forecasters say that Invest 93L will move westward at 15 to 20 mph over the tropical Atlantic during the next several days.

Invest 93L has a 90% chance of becoming a tropical cyclone within the next five days.

A little far out to be making that call.... IMO
Got Wobble?

Yeah no doubt. I figure 92L has a better chance of being Irma than 93L.
TalkWeather Members Do Not See This Ad - JOIN TODAY
A

If 93L develops, the GFS has a track similar to the Labor Day Hurricane of 1935. The EURO has the storm going out to sea after hitting the Leeward Islands.

Advisories likely to be initiated at 11am EDT 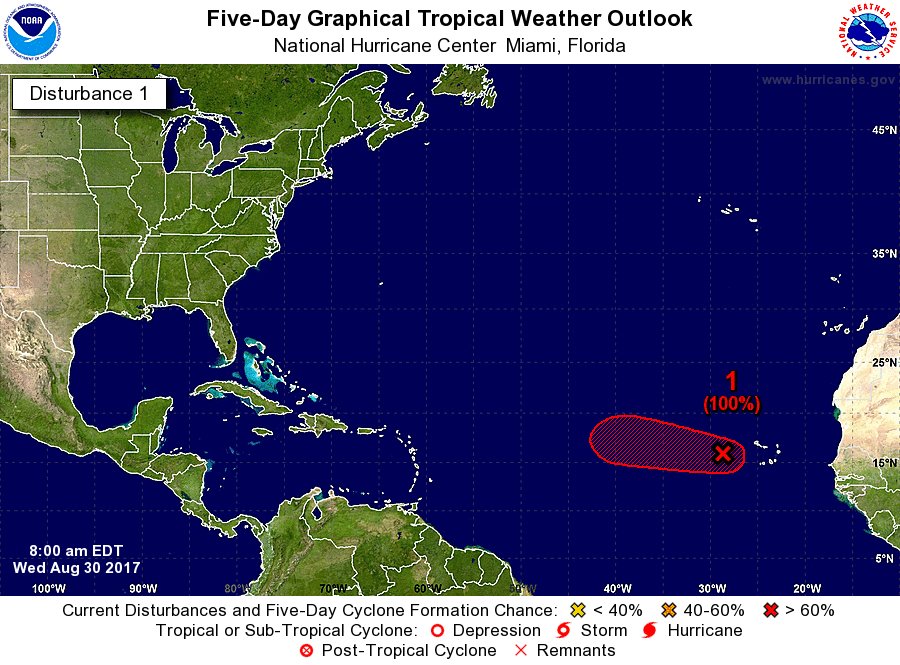 TalkWeather Members Do Not See This Ad - JOIN TODAY
S

This storm could be a threat to the US.
S

Irma continues to become better organized, with the development of
a small CDO feature and increased banding near the center. An
earlier high-resolution Windsat microwave overpass showed that Irma
has a tight inner core and a low-level eye-like feature was
present. A Dvorak classification of T3.5 from TAFB is the basis
for the initial intensity of 55 kt. Irma is expected to steadily
strengthen during the next couple of days while it moves through a
low-shear and moist environment, and remains over warm sea
surface temperatures. After that time, slightly cooler SSTs and
lower mid-level moisture may temper the intensification process.
However, the statistical aids, HWRF, and most of the consensus
models make Irma a major hurricane by the end of the forecast
period. The NHC forecast is fairly similar to the previous advisory
through 48 hours, but is above the earlier forecast thereafter. The
new official intensity forecast could still be a little conservative
as it remains a little below the SHIPS/LGEM guidance and the ICON
consensus at days 4 and 5.

Irma is moving westward at about 10 kt to the south of deep-layer
ridge over the eastern Atlantic. The track forecast reasoning is
about the same as the previous advisory, with Irma expected to turn
west-northwestward on Thursday, then continue on that heading
for a couple of days. The high pressure ridge over the central
Atlantic is forecast to strengthen later this week, which is
expected to result in Irma turning west-southwestward by the
weekend. There is still some spread among the track models, so the
NHC forecast lies near a blend of the typically reliable GFS and
ECMWF, and the HFIP corrected consensus.

GFS has Irma curving north and staying out of the Caribbean. The Euro has it coming closer to the Caribbean and a few have it going further south.
TalkWeather Members Do Not See This Ad - JOIN TODAY
S

Well, that was quick! Irma is already a category 2 hurricane:

Well she's taking off. I really think the rapid strengthening is gonna pull her further north than the Euro is showing.

"Scratch my back with a lightning bolt
Thunder rolls like a bassdrum note
The sounds of the weather is heaven's ragtime band...."~Jimmy Buffett
B

Why is the NHC track south of all of the Models?
TalkWeather Members Do Not See This Ad - JOIN TODAY

Irma will is forecasted by NHC to be a Major Hurricane sometime today.

Beer Belly said:
Why is the NHC track south of all of the Models?
Click to expand...

Here's what NHC says in their discussion:

Irma has moved somewhat south of and slower than all of the model
guidance since yesterday.

Guidance continues to trend southward, following the trend of
the ECMWF model starting yesterday. Given the strength of the ridge
and depth of the tropical cyclone, there are no obvious reasons to
discount the anomalous west-southwestward motion seen in most of the
guidance. Little change is made to the track forecast in short
range, but the track is shifted southward and westward at long
range, though not as far southwest as the overnight ECMWF and ECMWF
ensemble models.

South AL Wx said:
Irma has moved somewhat south of and slower than all of the model
guidance since yesterday.
Click to expand...

Almost never a good sign this far out. Thankful we have the humans at NHC who can forecast this thing especially for those island nations. Hang on folks. I think it is going to be Irma's Wild Ride.
Got Wobble?
TalkWeather Members Do Not See This Ad - JOIN TODAY

Model differences in the long range...