Jacob said:
Where are you seeing a drop in cases for AL? I haven't really seen a drop in cases yet, at least from a statewide average. There's a clear decrease across S Alabama.

Alabama is really a tale of two states at the moment, at least in the hospitalization data. Southern Alabama is falling quickly, while northern Alabama has continued to increase. For the last few weeks they've offset each other, and because of that the # hospitalized statewide has been roughly steady. Northern AL is following along closely with Tennessee's pattern, while southern AL is following with Florida/LA/MS.
Click to expand...

I believe they are using the "date of test" as opposed to "date of report" dataset. It's the best way to view it in review/post surge, but it can give you a false sense of the direction because the most recent week or two still has to fill in. Unfortunately the date of report for Alabama is so tainted because of data dumps and other things, that it can be difficult to decipher as well. It does look like in both though we may have formed a peak sometime perhaps about two weeks ago.

Evan said:
Seems pretty clear we're not going to see the rapid decline from peak that other countries and areas have had with Delta. It's going to be a long Fall and Winter since there's such a high baseline in the Southeast and the United States as a whole - especially, in light of the low vax rates in the Southeast.
Click to expand...

So it's been just over two weeks since we had a short discussion on this, so I thought I'd bring it back up. I see some reasons to be optimistic about where this current wave is headed, but I still share some of your more pessimistic concerns as we head into fall.

My reasons to be optimistic are how the numbers are moving in the deep south. This wave is collapsing across all the hardest hit areas that have peaked. I wasn't as confident in this two weeks ago when we discussed this, but hospitalizations and cases have been falling rapidly in Florida, Louisiana, Mississippi, southern AL. 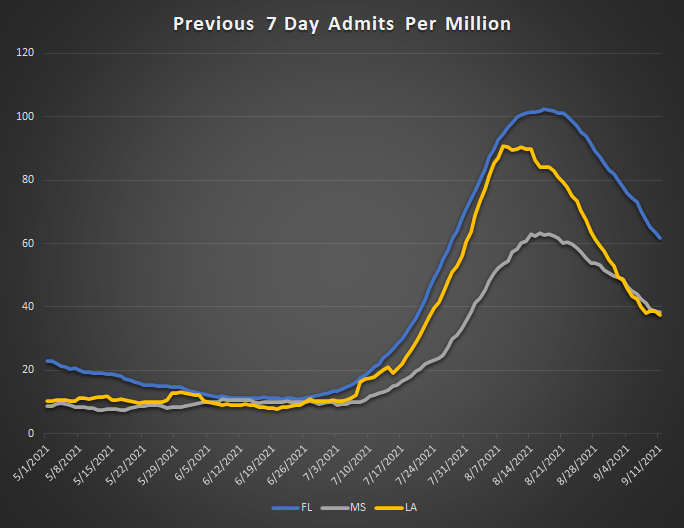 Reasons I'm still pessimistic: It's already September 13th, by this time last year the fall wave was beginning its increase across the northern US. While the Deep South is rolling over pretty hard, many areas have very high spread currently and either are just getting to peak (TN, GA, SC, KY), or haven't quite peaked yet (some/many northern states) from this wave. If we start seeing a seasonal stimulus across much of the northern US, we'll be starting from a substantially higher baseline than we did a year ago. I think based on current trends the south can probably decline back to similar levels to before last year's wave, but not sure about the rest of the country.

It is worth noting that areas across the north where the Fall 2020 wave really ramped up initially (Minnesota, Dakotas, Montana) are seeing decreasing values of R0, where last year it was very clearly increasing. This could just be noise/a small fall from a summer Delta peak before the fall wave really gets moving. Should have a better idea there by the first of October.
Last edited: Sep 13, 2021 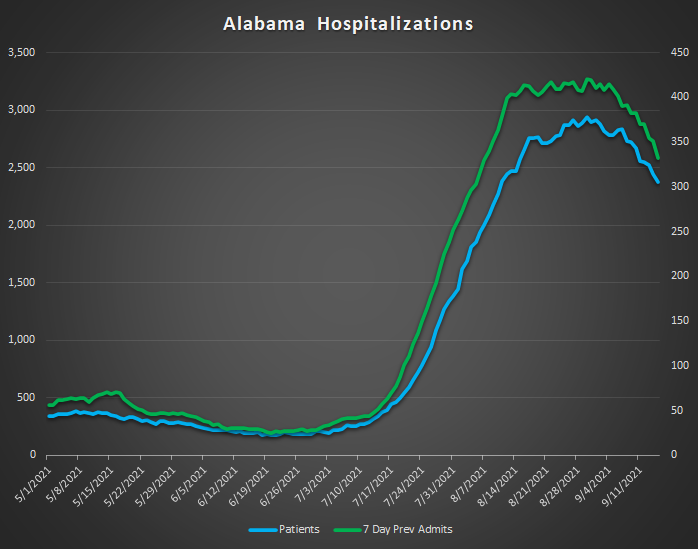 My parents ended up catching this at their church, a church primarily composed of anti-vaxxers and anti-maskers. The doctor flat-out told them they would have not made it if they weren't vaccinated due to their preexisting conditions.

I'm at the point to where I honestly loathe these anti-science idiots. In a perfect world, they would be the only ones getting sick from this. It's so incredibly sad that it is 2021 and this level of stupidity exists on this planet.

DB1313 said:
My parents ended up catching this at their church, a church primarily composed of anti-vaxxers and anti-maskers. The doctor flat-out told them they would have not made it if they weren't vaccinated due to their preexisting conditions.

I'm at the point to where I honestly loathe these anti-science idiots. In a perfect world, they would be the only ones getting sick from this. It's so incredibly sad that it is 2021 and this level of stupidity exists on this planet.
Click to expand...

How many of the people from the church died?

There's some truth in that, but hospitalization numbers are primarily decreasing because when somebody dies or gets discharged, there aren't nearly as many new people coming into the hospital. Deaths are always going to contribute on some level to the decreasing numbers, that isn't unique to this wave. Thankfully cases and new admissions are decreasing quickly. 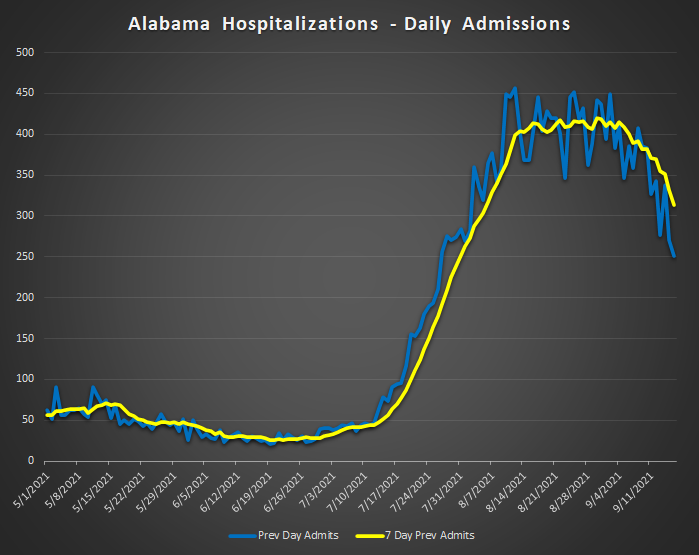 What are everyone's thoughts on the current status of Covid in the US and Alabama and what do ya'll thing will happen in a few weeks as we transition from fall to winter?

ghost said:
What are everyone's thoughts on the current status of Covid in the US and Alabama and what do ya'll thing will happen in a few weeks as we transition from fall to winter?
Click to expand...

Honestly, I'm not sure what to expect. Last year by this time it was obvious across the northern US that the fall wave was getting ready to explode. R0 estimates show it pretty clearly that spread was above 1 and increasing in the majority of the US, and the most in the northern states. R0 estimates for Sept 20, 2020 shown below

Compare that to the latest estimate of where we are currently, and you can see that across the vast majority of the country currently COVID is contracting.

The only areas that are seeing R0 values much above one at the moment are parts of the Upper Midwest and parts of New England. That's actually the southern Delta wave that spread north across the rest of the country, and not a separate northern wave forming (hopefully). It could be a bit of both, but so far it doesn't appear to be a new wave ramping up. This summer wave was displaced by a month compared to last year's, so we might see something similar this fall.

Note: that's simply a map of R0, it hides the fact that COVID is much more prevalent across the country currently than it was this time last year. 7 Day Average cases currently are around 135k, they were around 40k this time last year. That's the other big concern if we get a big surge up north is how high of a base it could be starting from.

As for the south, I'm cautiously optimistic about areas that were hit hard the last couple months. A LOT of people in the south caught COVID this go around. Anecdotally, it seems like everybody knows a lot more people that got it this go around than the winter wave. It'll be real interesting to see what places like Florida, Alabama (particularly southern AL), MS, and LA over the next couple of months, as there's a very high level of immunity present now. All of the deep south is in free fall at the moment, and hopefully it can reach pre-wave depths or deeper before we get a fall/winter stimulus here.

On a similar note to the south, India is a very interesting test case that hasn't gotten much discussion lately. Many areas that had Delta blow through there in April have had COVID all but disappear over the last few months. Uttar Pradesh had a 5 day average case rate of over 20k for a month, and peaked around 35k 5 day average in late April. Their current 5 day average number of cases is....13. I know things are different there and they have a different levels of testing and such, but that's a reduction in detected case rate of 99.96%.

On a related note, I've posted before that I think the disappearance of the flu is almost entirely due to viral interference, and has almost nothing to do with NPIs. India's data would currently seem to support that theory. After their massive COVID wave earlier this year retreated, our old friend came back there for the first time.

The image below isn't labelled, but it is for India. 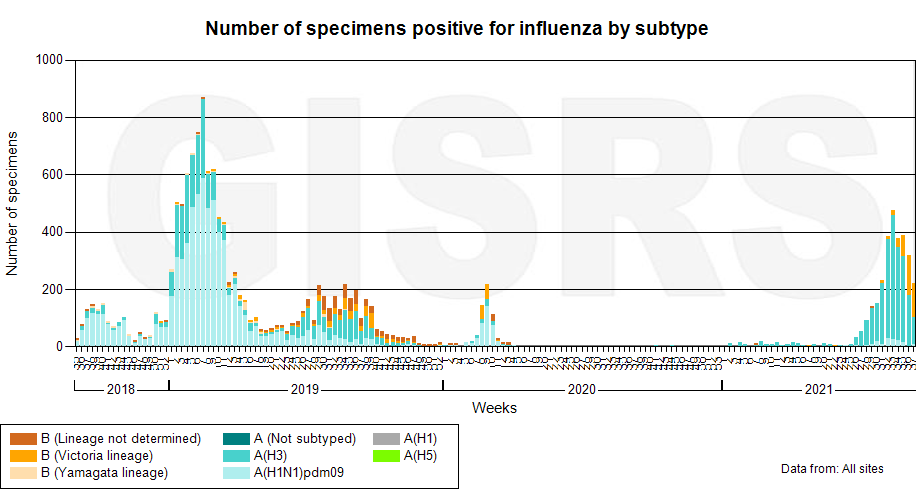