Jacob said:
Seeing a lot of the backlogged data fill in in Alabama yesterday/today. We get the occasional data dump here regardless of holidays, so I suspect we will continue to see them the rest of the week.

Increased cases here in AL (relative to the summer peak) reflect the increase in tests since the summer somewhat, but we've also now jumped past our highest hospitalization numbers from July. The increase across the southern states isn't as uniform this time, at least in how quickly the increases are occurring, as it was back in the summer. Alabama is ahead of MS/GA/SC/FL, and more in line with Tennessee. Not really sure the reason there, perhaps some testing/reporting differences between the states.
Click to expand...

More on Alabama resembling Tennessee, it's the northern third of Alabama that is surging at the greatest rate currently. Perhaps seasonality/weather related? It'll be interesting to see if this gradually transitions south over the coming weeks. The following maps are from Bamatracker 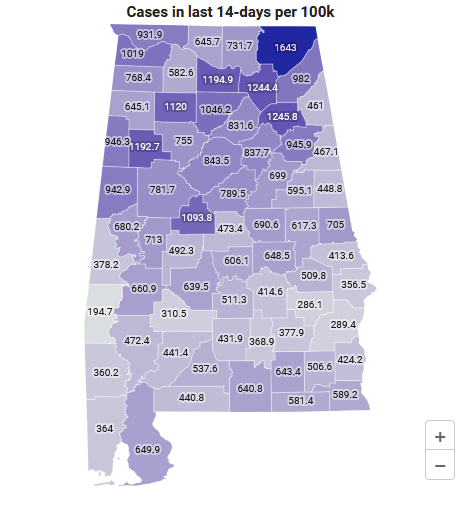 North Alabama will be interesting to watch over the next couple of weeks to see if they continue to increase quickly or if any signs of a peak can be found there. They've seen a pretty fast surge past the summer peak. Hospitalizations have been increasing pretty quickly now since mid-October. 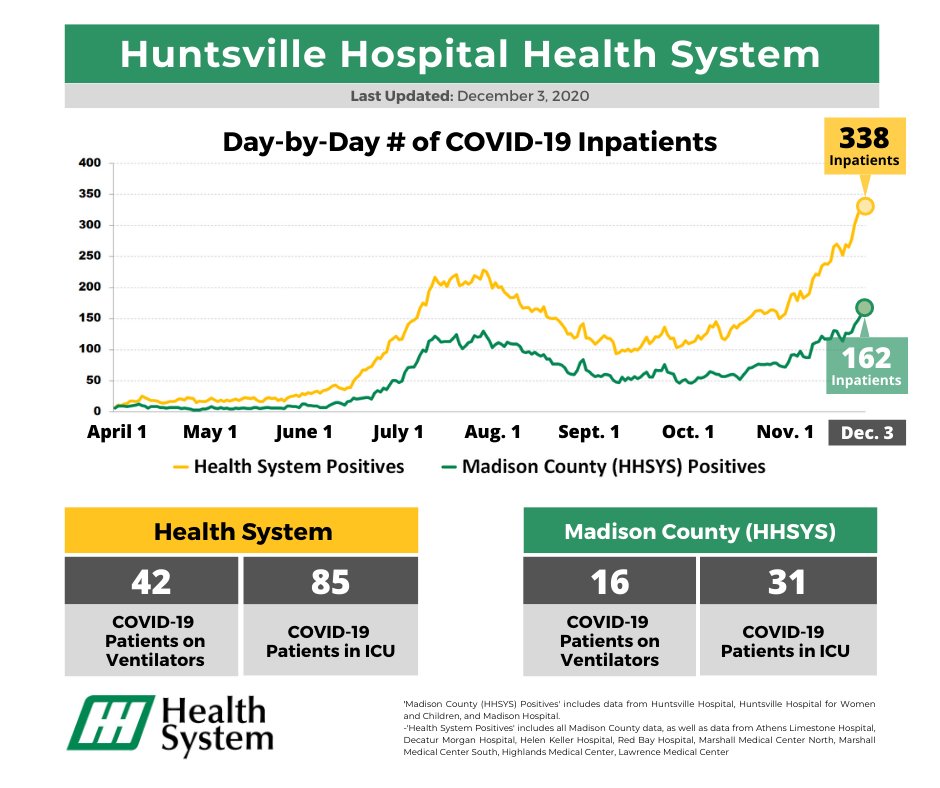 One thing to consider with Northern Alabama counties is many come down from Tennessee to work and mask mandates are at the county level there instead of the state level.

If you fast forward to the 0:30 mark of this video, there is only one county in Tennessee that borders Alabama and has a mask mandate.

Here are the Tennessee counties where masks are mandated right now

Multiple Middle Tennessee counties are under mask mandates as cases are soaring across the state. Tennessee saw its highest daily COVID-19 case count on Monday with 7,951 new cases reported. The state now has 320,729 cases overall and a death toll of 3,995. As cases surge, some Middle Tennessee...

Jacob said:
Looks like all of the upper midwest states have peaked, with hospitalizations and cases now dropping in North Dakota, South Dakota, Minnesota, Iowa, Nebraska, Illinois, and Wisconsin.

Next up to peak/start dropping in the next 1-2 weeks: Wyoming, Michigan, Indiana, New Mexico, Colorado, Kansas, Ohio, and Montana.
Click to expand...

I'm still optimistic that this statement has held up so far this week. Testing numbers and testing results are still contaminated by last week, but hospitalization number have continued to decrease in all the peak states I listed above, except for Minnesota, where they've been steady.

Minnesota's 7 day average has been basically unchanged since Nov 24th


On the states I mentioned to watch over the course of this week/next, I see no signs that those have peaked, except for perhaps Kansas and Montana. Kansas' data is sporadic so it is difficult to tell, and Montana's hospitalization numbers have been steady since Nov 12. Wyoming/Colorado/New Mexico/Michigan/Indiana all show the same pattern, which is a quick rise in hospitalizations, followed by a slower rise the last week or so. I'm hoping that means they are right near their peaks, but that'll take another week or two to determine.

Edit: Add Utah to the 5 above to watch for possible peak upcoming. Shows the same hospitalization pattern as the 5 above, but also has a declining CLI rate for ER visits.
Last edited: Dec 4, 2020

This is the first I've run across this guy and his models, but his modelling and ideas are based around the same pattern that I've been going on about. Interesting read, and I'll link his prediction models as well

Also, this is the one graphic that really stands out to me

I understand why he normalized that data since he's talking about the pattern, but it would be interesting to see it with raw numbers as well. The normalized data doesn't show the magnitude of the wave in the US versus the waves in other countries. The raw data wouldn't invalidate his point, but without that context, this data could be misrepresented to suggest that the course the virus took in the US was inevitable because the pattern is similar, rather than illustrating that the US' handling of the pandemic was much, much worse.
E

Today is going to be a rough day for cases and deaths once the final numbers are in. We really need things to level off or begin to decline or we're going to accelerate all the way through to New Years Day.
A people that elect corrupt politicians, imposters, thieves and traitors are not victims, but accomplices. -- Unknown

The hospital I work at in North Alabama has stopped all elective surgery and we have implemented our disaster plan. I have worked as a RN in surgery for the past 10 years and now I’m working nights in our overflow ICU taking care of non Covid patients. It’s definitely a bad situation and only getting worse. I can’t plead enough for people to please follow the guidelines. We are out of ICU beds and the ones we’ve created are being filled within a day. I’ve never felt so defeated in my career.

After today's update, I realized using just a 7 day average was inadequate due to how much the data jumps around at a state-to-state level from one day to the next. So I'm using both a 7 Day Average and a 7 Day Moving Average. This helps smooth out some of the daily jumps that can throw a 7 day average off a bit.

Here's what it looks like for the states that are currently falling. As you can see, Iowa, Nebraska, SD, ND, Illinois, Wisconsin, and Minnesota are all confirmed peaked and falling. It appears Indiana, Wyoming, and Colorado have rolled over, but it'll take a few more days before the the moving average can go negative and confirm this. New Mexico may be at peak currently.

Here's a good visualization of the spread from the last month. This is the same data mentioned in the above post, the 7 Day MA of Hospitalizations, with each state normalized at hospitalizations per 10 million people. Hopefully in another week or two we start seeing more states turn green.

I was having blood work done last week and noticed that at the doctors office they had a sign that said they could do the covid antibodies test. They already had the needle in my arm so I went ahead and asked for it. To my knowledge, I have not had covid and the anitbody test backed that up as it was negative as well.

Yeah, they tested mine when I gave blood last month and it was negative. Not surprising since I never had any symptoms and was never exposed to it (to my knowledge).

Ivey has extended the mask mandate in AL through Jan 22, no other changes were made.

If we are going to see a Thanksgiving surge that is distinguishable from the overall pattern, it should start showing up in the hospitalization data in the next 7 days, particularly in the upper Midwest. It'll be hard/impossible to pick it out around these areas because we are in the surge stage here.

As for here, case numbers and hospitalization numbers continue to rise quickly across the state, particularly the northern 1/2. COVID patients in Huntsville Hospital's system have risen 50% since the start of December, and are now roughly double the # of the summer peak. Seems like Birmingham is 1-1.5 weeks behind Huntsville, so once Huntsville starts to roll over (I'm guessing around Dec 15-18), we should get an idea of when the worst will hit Birmingham.
E

According to the NYTimes, only 9 states are seeing a reduction in cases over the previous 14 days. Hospitalizations are continuing to climb at a disturbing rate. Death rates have already eclipsed the horrible events that take place in the northeast during the Spring.

As the healthcare infrastructure becomes increasingly strained, I believe we're going to see a sharply accelerating death rate unless people change their behaviors and activities. I also think deaths will be substantially under-counted as our healthcare system and hospitals are overwhelmed.

Alabama is going to be absolutely CRUSHED leading into Christmas. As sad as this outcome is, it's doubly sad that the vast majority of it was easily preventable. People simply chose not to engage in simple and effective mitigation strategies and because of that thousands of people are going to die unnecessarily.
A people that elect corrupt politicians, imposters, thieves and traitors are not victims, but accomplices. -- Unknown
E

This thread was from 10 days ago. Prepare to be shocked beyond your wildest expectations (unless you work in healthcare in which case this is already your daily reality):

A people that elect corrupt politicians, imposters, thieves and traitors are not victims, but accomplices. -- Unknown
E

Family member spent almost 4 hours today at Urgent Care to get a rapid COVID test. That was after checking in at 9:30am and being told to come back at 2pm for a testing spot.

It's only going to spiral from here.
A people that elect corrupt politicians, imposters, thieves and traitors are not victims, but accomplices. -- Unknown

Evan said:
Alabama is going to be absolutely CRUSHED leading into Christmas.
Click to expand...

No doubt about that, we got crushed this week pretty hard and had to setup impromptu treatment areas in corridors that have never housed hallway patients. I've seen my fair share of patient overloads but this week was the worst. The hospital being full was a big factor in that and all the rooms housing covid(+) patients means we have a lot less to work with; so there's not just a problem of where to put suspected covid-19 cases but all medical emergencies.

Rest in peace, Charley, and thanks.

---
Please visit my earth science blog!
You must log in or register to reply here.