NHC is suggesting this becomes a Tropical Storm by 8 AM EDT Friday.

Photo is from GOES-East

As of the 2:30pm update, we have Tropical Storm Beryl!

Unless I've missed it, the GFS doesn't seem to have Beryl at all.
TalkWeather Members Do Not See This Ad - JOIN TODAY

MattW said:
Unless I've missed it, the GFS doesn't seem to have Beryl at all.
Click to expand...

GFS has it you just have to go out into the Western Atlantic for right now.

Apparently this tiny little thing, no bigger than a smaller end thunderstorm complex, is now a hurricane as per ATCF, with a tiny little eye showing up on IR. First usage of Beryl to name a hurricane and one of the earlier western MDR hurricanes we've seen.

Color me absolutely shocked. Great upper level conditions ahead of this microcane prior to the Caribbean islands. Beyond that, it's anybody's guess.

GFS has Beryl dissipating between Monday night and Tuesday morning. Heavy Rainfall and some wind will affect Puerto Rico.

Beryl is a tenacious little hurricane. It is now expected to still be a hurricane near the Lesser Antilles, and NHC now has a peak intensity of 100 mph.

...BRAZEN BERYL A LITTLE STRONGER...
...NOW FORECAST TO STILL BE A HURRICANE AS IT APPROACHES THE LESSER
ANTILLES...

NHC now doesn't have it dissipating until it is around Hispaniola. From their discussion:

The cyclone is
also now likely to persist beyond the 72-hour forecast point, and a
96-hour point has therefore been added to the official forecast,
showing Beryl near or over Hispaniola by day 4. By that point,
either increased shear or the terrain of Hispaniola would likely
lead to dissipation. But we shall see.

Lol this is crazy!

Wow that thing is tiny!

This tiny thing is so bizarre. If it avoids the SAL in its own little moist pocket with the upper anticyclone, I wouldn't be shocked at this point if it briefly hits major status. It's moving pretty fast so upwelling in decent SST's won't be an issue. Hope it threads the gap between islands because I'm sure there is a lot of post-Maria unease going on right now. It also really likes a westward trajectory right now; the point where it turns WNW will be important in deciding which islands to warn
TalkWeather Members Do Not See This Ad - JOIN TODAY

It sure is interesting watching this thing barrel towards the Antilles.

18z GFS has an interesting solution. Beryl dissipates south of Puerto Rico, but then a piece of energy goes north and blows back up into something about where TD3 is now and follows TD3 (and whatever it forms into).
TalkWeather Members Do Not See This Ad - JOIN TODAY

Could this be the beginning of the end for the "Little Storm That Could?" Stay tuned kids, same bat time, same bat channel.

...BERYL WEAKENS TO A TROPICAL STORM... 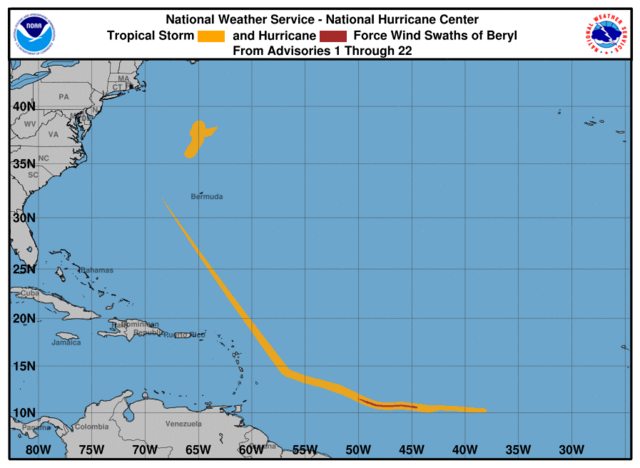