How big is a tornado really? (1 Viewer)

Sounds like an obvious question right? But I was thinking the other day, we see the funnel and call that the tornado, but could the winds beyond it be considered the tornado too? Even if they're not damaging, could the circular winds extending hundreds of yards from the visible funnel be considered to be part of the tornado too? In that case, how big would that wind field be before the winds cease to be driven by the storm and driven by...whatever can drive winds?
W

Yes. A lot of times the winds outside a tornado are 70+. Examples would be inflow and the rear flank downdraft. Also if it’s a multi vortex tornado you may several smaller funnels circulating around a central base. This a lot of times is why you’ll have two houses side by side with one being destroyed and the other having minor roof damage.

With inflow jets, RFD, and other complicating factors, it would be probably hard to pin down even IF a tornado's with corresponded with the condensation funnel... which tends to be vastly smaller than the actual area of damaging winds.

It's easy to imagine a tornado as a solid entity with defined spatial parameters, but it's probably better to envision as a process rather than an entity, with fluid transitions and interactions that are really hard to pin down; case in point the Mulhall OK tornado of 1999 with its 4+ mile wide swath of significant damage.

We usually define tornado width by the outermost points of EF0-threshold damage but those with better mathematical foundation could might be able to extrapolate how far beyond that the tornado as a rotating updraft process exerted influence... if we use the furthest point where there is any indication nof a pressure fall or wind shift I'd imagine it would be far larger than we would think even for very weak tornadoes
TalkWeather Members Do Not See This Ad - JOIN TODAY 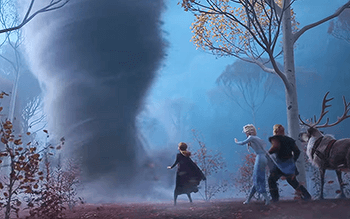 Do Not Touch the Funnel Cloud - TV Tropes

Tornadoes. One of the most beautiful, deadly and terrifying manifestations of nature's fury. They can strike anywhere at any time, claiming hundreds of lives each year and causing billions in widespread property damage. ...unless, of course, you …

I’m confused with your terms of funnel and tornado. What about how we were taught in storm spotter’s class not to classify it as a tornado UNTIL we could visibly see it touch the ground, unless we saw debris kicking up, we were to report a funnel.
Skywarn Storm Spotter
Wx Geek Extraordinaire
Philippians 4:13
TalkWeather Members Do Not See This Ad - JOIN TODAY
You must log in or register to reply here.