...POTENTIAL TROPICAL CYCLONE OVER THE SOUTHWESTERN GULF OF
MEXICO...
...EXPECTED TO BRING HEAVY RAINFALL AND FLOODING TO THE NORTHERN
GULF COAST...

A Tropical Storm Warning has been issued for the Gulf Coast from
Intracoastal City, Louisiana, to the Alabama/Florida border,
including Lake Pontchartrain, Lake Maurepas, and Metropolitan New
Orleans.

A Tropical Storm Warning is in effect for...
* Intracoastal City Louisiana to the Alabama/Florida border
* Lake Pontchartrain, Lake Maurepas, and Metropolitan New Orleans

A Tropical Storm Warning means that tropical storm conditions are
expected somewhere within the warning area within 36 hours.

Interests elsewhere along the northern Gulf Coast should monitor
the progress of this system.


DISCUSSION AND OUTLOOK
----------------------
At 400 PM CDT (2100 UTC), the disturbance was centered near latitude
22.9 North, longitude 92.4 West. The system is moving toward the
north near 9 mph (15 km/h) and this motion with some increase in
forward speed is expected for the next day or so. On the
forecast track, the system will approach the north-central
Gulf Coast late Friday or early Saturday. A northeastward motion
across the southeastern United States is likely after landfall.

Maximum sustained winds are near 30 mph (45 km/h) with higher gusts.
Some strengthening is forecast tonight and Friday.

RAINFALL: The potential tropical cyclone is expected to produce
total rainfall of 3 to 6 inches with isolated amounts of 8
inches across the Yucatan Peninsula of Mexico. Rainfall totals of
4 to 8 inches with isolated maximum amounts of 12 inches are
possible beginning Friday and continuing through the weekend from
the Central Gulf coast northeastward into the Southern Appalachians.
This will likely produce areas of flash, urban, and small stream
flooding as well as minor to isolated moderate river flooding with
new and renewed rises on already elevated rivers.

STORM SURGE: The combination of storm surge and the tide will
cause normally dry areas near the coast to be flooded by rising
waters moving inland from the shoreline. The water could reach the
following heights above ground somewhere in the indicated areas if
the peak surge occurs at the time of high tide...

Surge-related flooding depends on the relative timing of the surge
and the tidal cycle, and can vary greatly over short distances. For
information specific to your area, please see products issued by
your local National Weather Service forecast office.

WIND: Tropical storm conditions are expected to first reach the
coast within the warning area on Friday, making outside
preparations difficult or dangerous.

TORNADOES: The threat for a couple tornadoes should begin Friday
afternoon across coastal Louisiana. This threat should expand
northward across southern portions of Louisiana and Mississippi, and
southwest Alabama on Saturday.

A Tropical Storm Warning is in effect for...
* Intracoastal City Louisiana to the Okaloosa/Walton County line.
* Lake Pontchartrain, Lake Maurepas, and Metropolitan New Orleans
Got Wobble?
A

It looks like this won’t be Claudette after all.
TalkWeather Members Do Not See This Ad - JOIN TODAY

It became Claudette just as it was coming onshore this morning.

I think we are about to see a pretty decent tornado threat evolve with that band stretched across the Florida panhandle into southeast Alabama.

The Tropical Storm Warning for eastern North Carolina has been
discontinued.

There are no coastal watches or warnings in effect.


DISCUSSION AND OUTLOOK
----------------------
At 800 AM EDT (1200 UTC), the center of Tropical Storm Claudette was
located near latitude 36.4 North, longitude 76.3 West. Claudette is
moving toward the east-northeast near 28 mph (45 km/h). An
east-northeastward to northeastward motion with some increase in
forward speed is expected over the next couple of days. On the
forecast track, the system will cross into the western Atlantic
Ocean later this morning, and pass just south of Nova Scotia on
Tuesday.

Tropical-storm-force winds extend outward up to 140 miles (220 km)
from the center in the southeastern quadrant.

The estimated minimum central pressure based on surface
observations is 1007 mb (29.74 inches).
Got Wobble?

If you all haven't heard that wreck that was on I-65 this weekend killed 10 people 9 of which were children ranging in ages 9 months to 17 years old. Let's keep the families in our thoughts and prayers.
12 People in all lost their lives due to Tropical Storm Claudette. 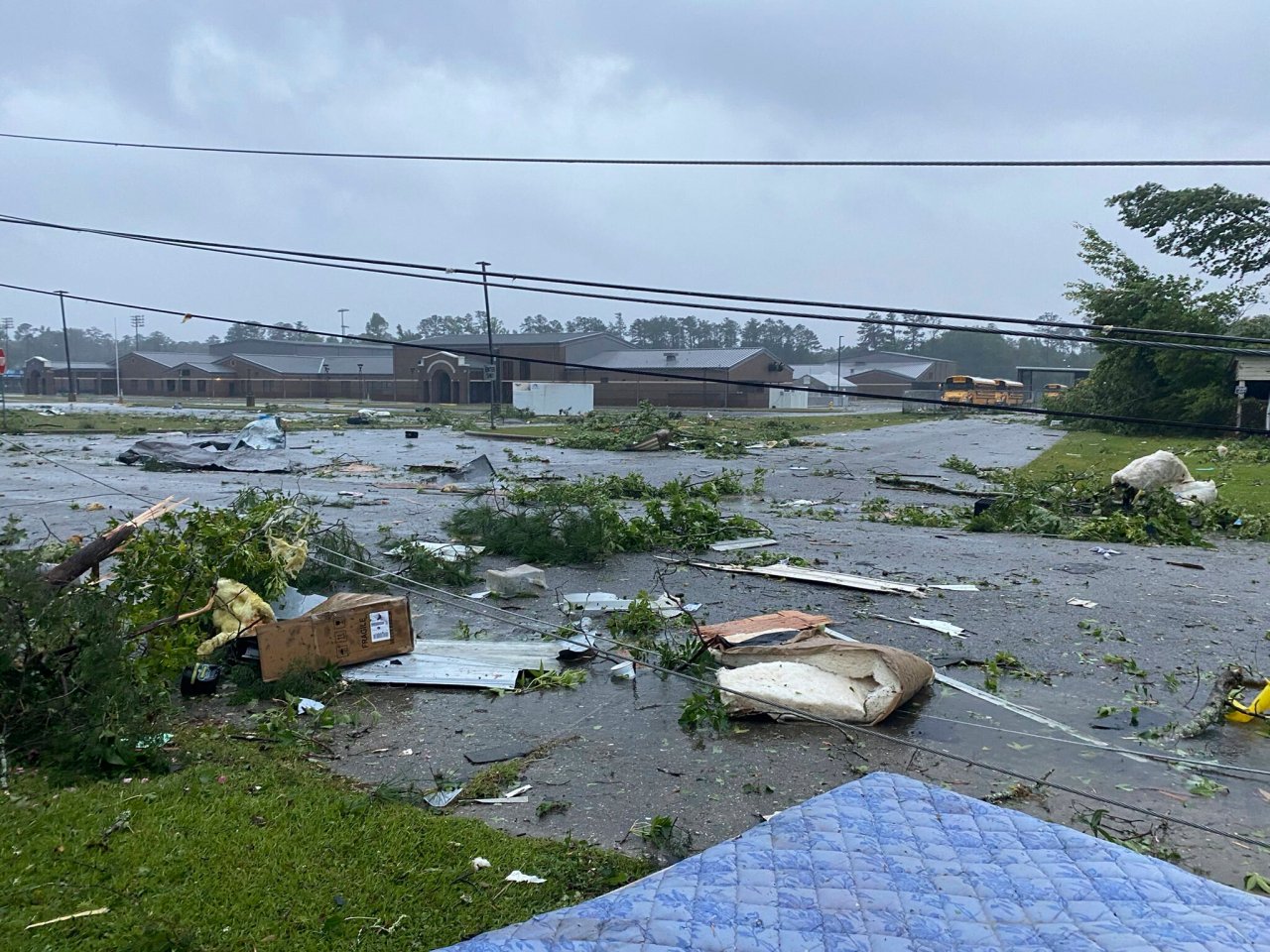 Official: Alabama crash that killed 10 “likely” due to storm