Spent this morning doing some light reading on a few subjects related to my day to day job. One of the items was about the analytics that Amazon is likely to use to decide where to land their HQ#2. Lots of cities applied (including Scottsboro, Alabama which I give a big thumbs up to for making the effort and read below why I think that is a good idea). After reading several of the reports and also looking at the wish list from Amazon I think I'm ready to put down my bet for the potential winner. Based on a series of factors plus a few other items I think Louisville, KY will win out as the Amazon HQ#2.

Why Louisville? Well, it all comes down to being able to breathe a little. Louisville has a large international airport that is focused mostly on cargo operations for UPS. The good thing is it has the ability to grow and knowing Amazon's love of acquisitions it might even fuel a bid to absorb UPS. Access to multiple interstates is another big plus, while you might be thinking I'm spending too much time on cargo you have to remember that no one city is going to just have 50,000 tech employees on standby. Those interstates connect Louisville easily to Nashville, Indianapolis, Chicago and other regional tech hubs that would be drawn on to help build the Amazon tech force. Louisville also has areas to grow when it comes to housing as well and while it doesn't quite have the public transit infrastructure that somewhere like Seattle or New York has, it has room to grown.

There are a lot more reasoning but I just wanted to lock in my bet on Louisville.

Now a word about why this process is so important and why I'm proud of Huntsville, AL and Scottsboro, AL for submitting their proposals. Let's face it the wish list that Amazon described simply doesn't exist. The sheer amount of people and infrastructure just doesn't exist but by going through this process of accepting proposals they are doing something else that they do on each one of us that use their services... they are collecting data.

I grew up in Arab, AL which is located in Marshall, Co. The small city touches a total of 4 counties if you really look at it from a 15,000 ft. view (Marshall, Cullman, Morgan and Blount). The key thing about this area that noticed was the point that it sat on two distinct power sources (TVA via Arab Electric Co-op and Joe Wheeler Co-Op and Alabama Power) and there were existing data backbones traveling through the city via Earthlink (formerly ITC Deltacom). I suggested to quite a few people that the area would be ripe for a large scale data center if the city and counties worked together to advertise their unique position, especially with tech savy Huntsville just 35-40 minutes away. I literally had people laugh at me. Yet look over to Jackson County and see that Google is investing in a large data center there because of the termination points to multiple grids. So with that in mind I think it is great to hear that Huntsville and Scottsboro in N. Alabama are submitting their bids to Amazon. While we may never have a chance with the Amazon HQ#2, it could serve as a data point for other projects such as data center, distribution warehouses or as home for any number of Amazon related tech companies (we already have Amazon owned Curse in Huntsville and Jeff Bezo's Blue Origin looking to ramp up rocket engine assembly in Huntsville with a favorable contract win from ULA). So it never hurts to provide a few more data points to keep the N. Alabama region included down the road.

So now with the full disclosure stuff... TalkWeather is operated on Amazon Web Services platforms and we have received free credits for hosting due to participation in several programs. I also have friends that work at Blue Origin in Kent, WA and have been offered no inside information.
Got Wobble?
M

Top 20 list has been released by Amazon. Regionally, Nashville and Atlanta has made the cut. Nashville will really have to invest in public transportation to pull this off. 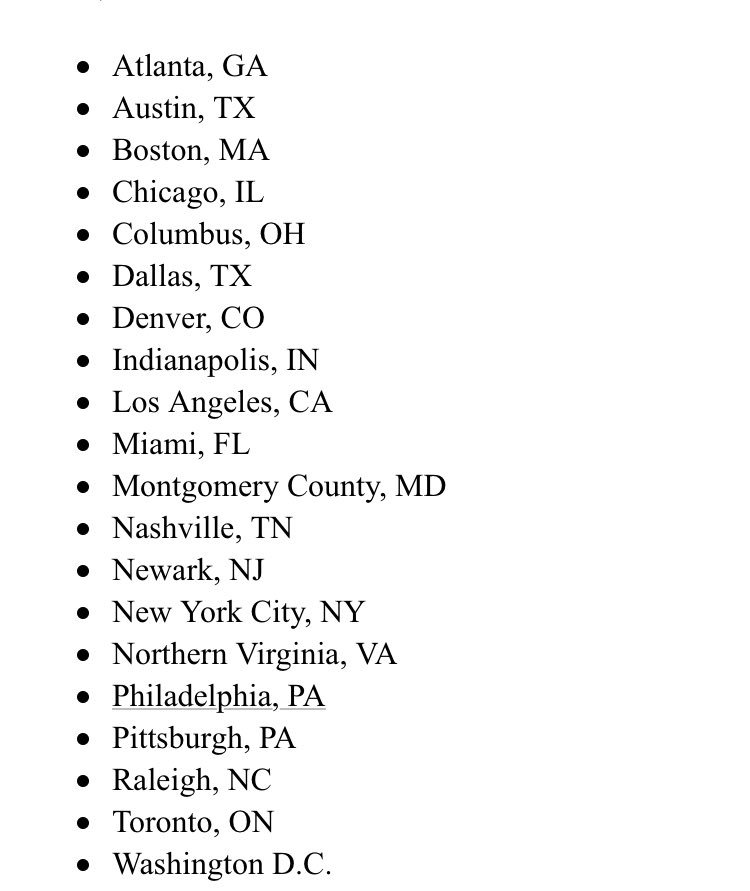 Well I struck out with Louisville. I like Nashville, Indianapolis and Atlanta.
Got Wobble?

I think quality of life is going to be a huge deciding factor, so I'm thinking warm weather.

Atlanta probably has most of what they are looking for, including mass transit.

Raleigh is a high tech hub.

Austin & Dallas will be in the running as well.

I kind of see Nashville as a long shot, but I would not rule them out by any means. The Nashville Star runs between Lebanon on the east side of town and downtown Nashville. The eastern suburbs would be a perfect spot to build HQ2.

So that's basically my top 5, in order, Atlanta, Raleigh, Austin, Dallas & Nashville. Denver might not be warm climate but I wouldn't sleep on them either.

NOLA was eliminated. Not surprised considering there are weekly boil water advisories due to treatment facility failures, one of the highest tax rates in the US, crumbling infrastructure, and rampant crime.

That city is a hellhole.
TalkWeather Members Do Not See This Ad - JOIN TODAY
J

Long time lurking here but this is my first post. A lot of people here in Nashville were shocked we made it to the top 20. As mentioned our public transit system is horrible but we do have a lot of culture.

JoeT said:
Long time lurking here but this is my first post. A lot of people here in Nashville were shocked we made it to the top 20. As mentioned our public transit system is horrible but we do have a lot of culture.

I did my best to get out of there after high school. Wound up in Alabama and haven't left since. I find many people get "trapped" there per se. A lot of service industry jobs that just aren't provided in that quantity elsewhere in the country.

People often look at me perplexed when I tell them how horrible it is to live there. Granted, these are people who are vacationing there for 3 or 4 nights. I spent 18 years.

WesL said:
Well I struck out with Louisville. I like Nashville, Indianapolis and Atlanta.
Click to expand...

Louisville made one major mistake. They should’ve put Pitino in charge of recruiting Amazon.
TalkWeather Members Do Not See This Ad - JOIN TODAY

maroonedinhsv said:
Louisville made one major mistake. They should’ve put Pitino in charge of recruiting Amazon.
Click to expand...

I so walked into that one
Got Wobble?

Austin, TX is one of my favorite places in the country. Nobody will ever run out of things to do there, fantastic atmosphere.. it's like Portland, Oregon but with southern hospitality. The downside there is that the infistructure hasn't kept up with the populous. Traffic is a nightmare, and they don't have enough level 1 trauma centers (one or two) to deal with the most critical patients from the numerous car accidents that occur in the overwhelming urban environment.
It'll take time for the roads to expand enough to handle the traffic.

YES!! I couldn't have said that any better. So stealing that line.
Got Wobble?
TalkWeather Members Do Not See This Ad - JOIN TODAY

https://www.wsj.com/articles/amazon-plans-to-split-hq2-evenly-between-two-cities-1541446552
TalkWeather Members Do Not See This Ad - JOIN TODAY

Crystal City(D.C.) and New York City are the choices.

AND Amazon just announced that Nashville is now getting a facility that will be their hub of East Coast Operations. I used to live in the Gulch and for the life of me I can't figure out where they would put a facility that large North of The Gulch.

"Nashville will become home to Amazon's East Coast hub of operations, according to the Nashville Area Chamber of Commerce. The company's $230 million capital investment is expected to create 5,000 full-time corporate jobs. Amazon's new Operations Center of Excellence will be located at a 1 million-square-foot facility north of the Gulch in downtown Nashville."

I think it was. Everyone with half a brain about economics knew that it was going to be those two cities once they outlined their criteria. Coastal city, large highly educated employee base, and major metropolitan areas with water and air commerce routes.
TalkWeather Members Do Not See This Ad - JOIN TODAY

It does seem Nashville is getting a very small piece of the pie, but nothing to sneeze at for sure. https://www.al.com/news/2018/11/amazon-hq2-nashville-gets-230-million-operations-center.html

I was really hoping it wouldn't end up here. Our public transportation system is held together with paper clips and chewing gum as is, not to mention the effect this will have on the already ridiculous housing costs in northern Virginia. We had been looking at moving down to northern Virginia since it's more convenient for both of our jobs than living in Maryland is, but that whole thing is throwing a wrench into the process.
You must log in or register to reply here.